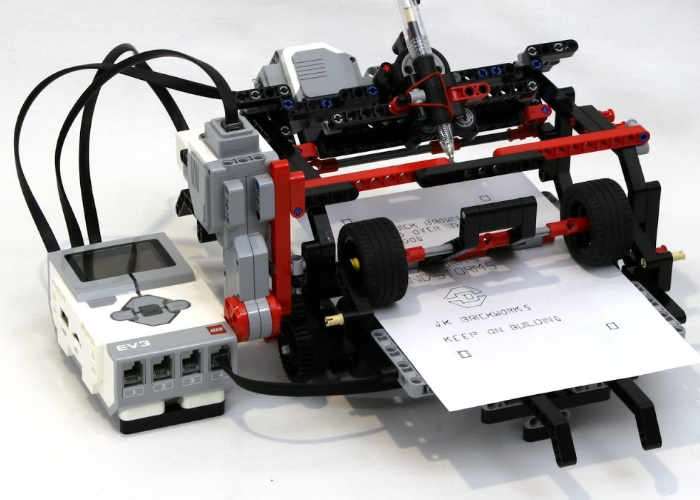 Jason from JK Brickworks has unveiled a new LEGO project which takes the form of an awesome LEGO Telegraph machine and printer, for which full documentation can be found via the link below.

Using LEGO Mindstorms EV3 set (31313) Jason has created both the Telegraph and printer using a touch sensor allowing users to tap out a sequence of letters using Morse code which is then printed. Watch the videos below to learn more about this unique LEGO build.

One project that had been on my to do list for a long time was to build a working printer using a single LEGO Mindstorms EV3 kit (31313). In addition to having basic printing capabilities, I also wanted an easy way to tell it what to print on the fly, without having to manually change the program. For that I added a touch sensor, essentially turning it into a telegraph machine, so that you can tap out a sequence of letters using Morse Code which it will then print.

I put together building instructions for it, which you can find along with the program file and more detailed information about how it works, down below. The printer is designed as a plotter, using a gel pen mounted on a carriage to deposit ink on the paper. It can accommodate standard sheets of letter paper cut in half. I posted a video a couple of months ago explaining how the printer works in detail, which you can watch here. This is the first part in a larger project and I will be posting building instructions and more information when I post the next video for it in a couple of weeks.