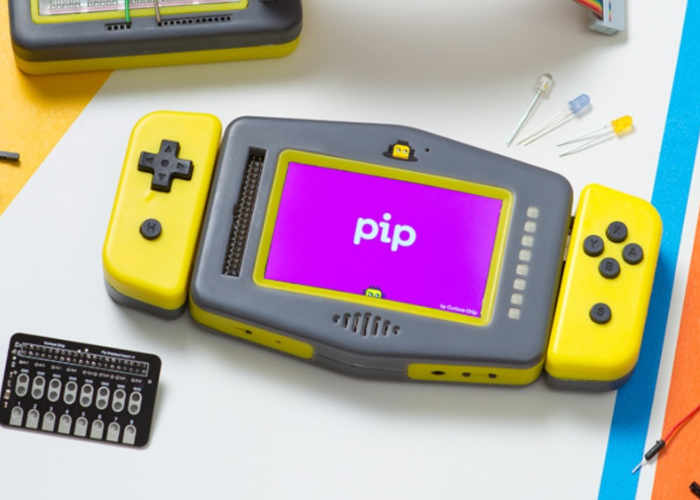 If you would like to learn more about electronics and learn to program you might be interested in a new project for a Raspberry Pi powered Pip educational handheld which as expected has this week launched via Kickstarter with the aim of raising £30,000 allowing the team at Curious Chip to take the educational system into production. To recap Pip as both a games console and educational tool created for children aged eight and above and offers the ability to learn a number of programming languages including Javascript, Python, Lua, PHP and HTML/CSS. Pip is equipped with the awesome Raspberry Pi hardware and has been designed to grow with your knowledge and come supplied with a Pip Breadboard Attachment, a PipHAT, and an integrated camera module. The makers of Pip explain more about its inspiration, features and educational uses :

Pip is the handheld device that puts digital creation in your pocket.  Make fun games, invent your own apps, or take control of objects around you! Start with drag and drop programming, then go on to play with real code, tinker with technology and invent with endless possibilities. Playing games on Pip is fun, but Pip gives you the ability to change them and make them your own. From making LEDs flash and adding your own photos to games, to even turning a banana into a fire button! It’s easy with Pip’s simple Curiosity programming environment. Access lots of fun tutorials and projects with interactive step-by-step instructions so you can learn at your own pace.

– PipHAT connects to Pip’s 40-pin expansion connector and lets you use everyday objects as buttons. Control a game with grapes! Go bananas!
– The Pip Breadboard Attachment lets you make and experiment with simple circuits using cheap, off the shelf parts – no expensive stuff to buy here. The breadboard is fully isolated – which is just a fancy way of saying you can hook up your circuit without turning off Pip.
– Already have a Raspberry Pi? Available as a standalone backer reward, PipHAT and the Pip Breadboard Attachment are compatible with your existing Raspberry Pi 2/3.

Pip is now available to back via Kickstarter with early bird pledges starting from just £15 and delivery expected to take place during April 2018. For full specifications and more information jump over to the official Kickstarter campaign page via the link below.