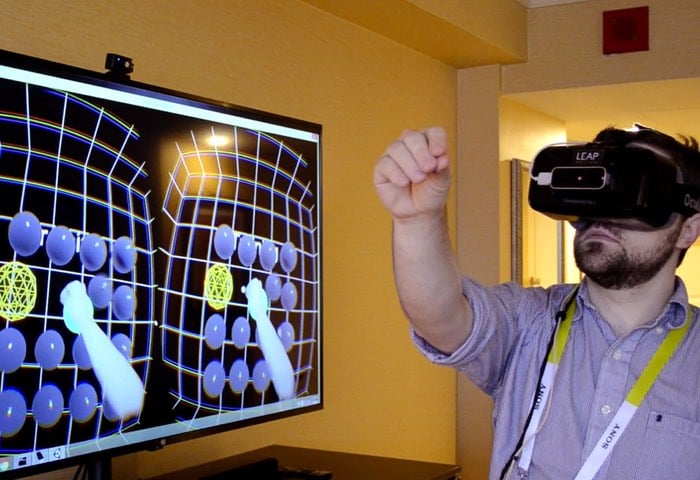 With the arrival of consumer virtual reality headsets picking up steam, it has been revealed this week that the development team behind the Leap Motion system are working on providing users with an intuitive controller free interactivity system to enhance the VR headset and overall experience.

The company has recently revealed details of its new ‘Interaction Engine’ which usurps standard physics engines when it comes to defining interactions between user input and virtual objects, says the Road To VR website who explain more about the new technology.

The Interaction Engine is a sort of intermediary between the user’s input and the physics engine, Kruse told us. Left to physics alone, grabbing an object too tightly might cause it to fly out of your hand as your fingers phase through it. The Interaction Engine, on the other hand, tries to establish your intent (like grabbing, throwing, or pushing) based on what the Leap Motion tracker knows about your hand movements, rather than treating your hand in VR like any other object in the physics simulation.

To re-cap the Leap Motion hardware isa small device roughly the size of a smartphone that has been built to senses how you naturally move your hands, enabling users to reach into the world beyond the screen and provide a more immersive environment for in virtual reality and augmented reality gaming and applications. The system is also compatible with both Mac and PC systems. Check out the video below to learn more. Leap writes on its website :

Jump over to the official Leap Motion website or Road to VR website via the links below to learn more about the developing technology.