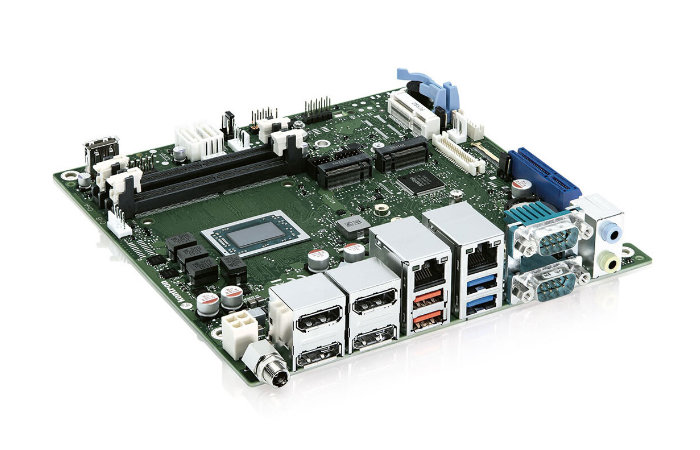 At this months Embedded World 2022 exhibition , Kontron has this week introduced its new mini ITX motherboard featuring an AMD Ryzen Embedded R2000 chip. The motherboard has been developed in Germany and will also be produced there in the future and has been created with AMD Radeon Vega Graphics, making the motherboard particularly suitable for embedded graphics applications.

The AMD Radeon Vega GPU integrated in the SoC (Vega 3, 6 or 8 are available) is capable of supporting up to four independent displays in 4K resolution. The motherboard is also equipped with two SO-DIMM memory modules, fast DDR4-2666 or 3200 with a maximum of 32 GB wth Dual Channel and ECC support available.

Input and output ports on the motherboard include Dual GbE, COM (RS232, RS422, RS485), USB 3.1 Gen2, M.2 (Key-M, Key-B) and much more. Together with a wide variety of DC input (8 V – 36 V) also allows for universal operation in a wide variety of applications explain the designers at Kontron.

“Compared to V/R1000 APUs (Accelerated Processing Units) from AMD, it delivers higher performance. Besides the lower price, the new model also convinces with Windows 11 support and a long life cycle of seven years. Like all Kontron motherboards with the denomination D3xxx or K3xxx, the D3723-R is produced in Germany.”