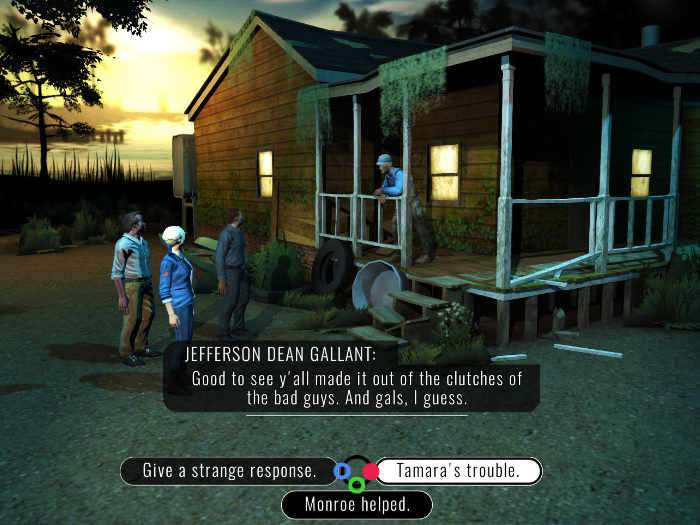 A new launch trailer has been released this week for Knee Deep ahead of its release onto the PlayStation 4 console later this month on January 31st, 2017 and a little later on February 3rd for Xbox One. Providing more details on what you can expect from the new indie adventure, mystery console game, which was made available on PC systems last year.

Knee Deep lets take centre stage  as you investigate the death of actor Tag Kern in a forgotten roadside attraction along Florida’s Interstate 95. Check out the latest launch trailer below to learn more about what you can expect from this indie game.

Knee Deep is an episodic adventure for PS4 and Xbox One during which you choices guide the storyline as you investigate a mysterious suicide.

You’re the writer, director, and star of the Prologue Theatre’s performance of Knee Deep, a swamp noir adventure in three acts. When a washed-up actor hangs himself on location, a spotlight is cast on the backwater Florida town of Cypress Knee. Knee Deep is a crime thriller where choices matter as you investigate this mysterious suicide.

Your screen becomes a stage as you investigate as three distinct characters: cheeky blogger Romana Teague, down-and-out local reporter Jack Bellet, and cynical private investigator K.C. Gaddis. Use your skills of observation, deduction, and cleverness to pull back the curtain and reveal the true story behind this swampland conspiracy.

Experience a magical reality where characters are transported among scenes, set pieces moved into place, and music wafts from the orchestra pit. Knee Deep is about characters, storytelling, and the melodrama of swampland Florida.