‘Soon’ as in pre-orders go live come November. In retrospect, it was inevitable. The intergalactic warrior race have now been given their own Monopoly game. Not sure if you have to speak Klingon when playing Monopoly Klingon, but the promotional literature is awesome. Detailed replicas and an ‘authentic’ chancellors cane are just a few of the juicy items locked within each set. Not sure if players of Monopoly Klingon will come to blows, but every game will surely be intense. 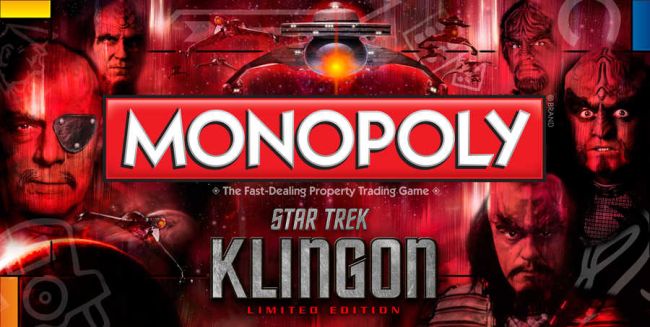 What’s pictured above is what the new Monopoly Klingon WON’T look like, meaning the faces of all those bad guys aren’t staring at you, their thinly veiled wrath a not so subtle hint that maybe you should play the game. For lack of available pics, let the above stand in for now. The box itself is a rather un-dramatic affair with the word ‘Klingon’ in big letters and a couple of torches.

Anyway, aside from the no doubt exciting game play, the tokens here are worthy of the Kahless himself. Imagine an exquisitely carved Bird of Prey, bat’leth and other Klingon icons. A lot of passion definitely went into preparing this most warlike of Monopoly variants.

An epic video to match your excitement:

Oh yeah, it says on the official site that each Monopoly set is forged in the fires of Kris’tak. We believe it 100%.