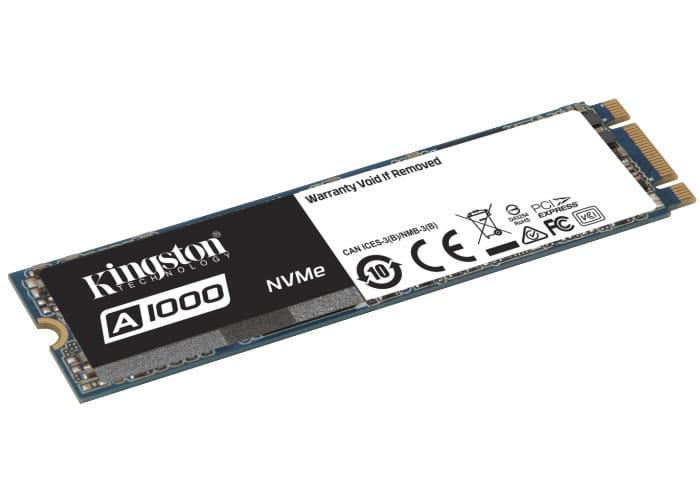 Kingston Digital the Flash memory affiliate of Kingston Technology Company has today announced the immediate availability of their new entry-level A1000 NVMe PCIe SSD which is available in 240GB, 480GB and 960GB capacities and is backed by a limited five-year warranty. The consumer grade PCIe NVMe SSD utilising 3D NAND storage delivers twice the performance of SATA at near SATA pricing.

“Kingston is excited to release its newest SSD for the entry-level PCIe NVMe market. Designed with 3D NAND Flash memory, A1000 is more reliable and durable than a hard drive and doubles the performance of a SATA SSD. Now we can give consumers the benefit of PCIe performance at about the same price as SATA,” said Tony Hollingsbee, SSD Business Manager for EMEA at Kingston. “Consumers can replace a hard drive or slower SSD with A1000 and have the storage needed for applications, videos, photos and more.”

Features of the new hard drive include incredible read/write speeds the A1000 will not only increase performance but can also be used to breathe new life into older systems, multi-purpose SFF connector replaces small mSATA and mini-PCIe slots and PCIe NVMe Gen 3.0 x2 Lanes interface. Full specifications jump over to the official Kingston Digital website by following the link below.