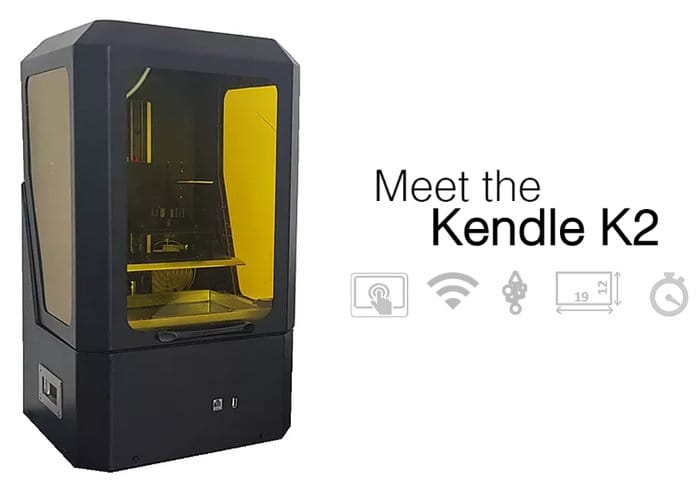 Hardware manufacturers Kendle this week unveiled a new high-speed professional large format SLA 3D Printer they have created in the form of the Kendle K2. The K2 offers both an affordable system and large printing area which measures 190 x 120 x 220 mm in size, as well as a printing speed of up to 5 seconds per layer when using Kendle Resin, which the company says is 20 times faster than the more traditional FDM resin. The engineering team has also been creating a crystal clear resin which has been in development for over two years and provides a printing material with no discolouration during or after printing. Watch the demonstration video below to learn more about its features, design and functionality.

The Kendle K2 SLA printer has this week launched via Kickstarter to raise the required funds it needs to make the jump into production. Earlybird pledges start from approximately £911 and worldwide delivery if all goes well is expected to begin during March 2018. The K2 It is also capable of off-line printing and is equipped with an external touchscreen LCD (2560 x 1600 pixel resolution with a 339 PPi), which connects to the 3D printer using your wireless network, USB or an Ethernet connection. The complete system weighs 25kg and measures 300 x 300 x 575 mm in size, offering a layer precision of 10 to 500 µm and an XY resolution of 75 µm.

For more videos and imagery of what can be created on the Kendle K2 SLA 3D Printer jump over to the official Kickstarter campaign page by following the link below.