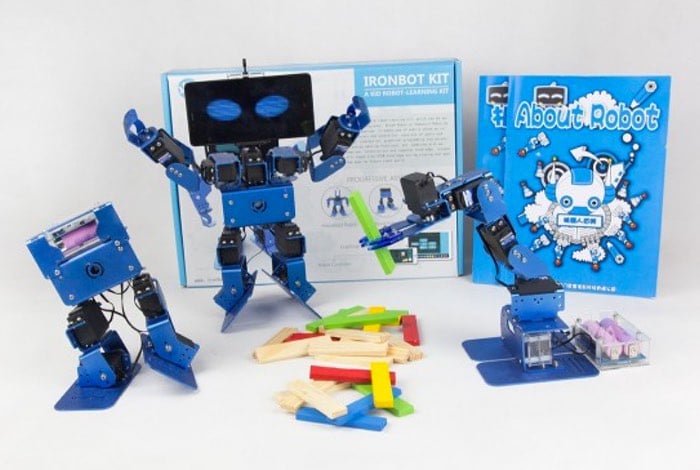 IronBot is a new 3-1 educational robot kit which has been specifically designed for children aged 8 and above and enables children to learn STEM and robotics in a fun and creative way say its developers.

Watch the video below to learn more about what is included in the kit and the projects that users can create, and in the process learn more about programming and robotics in a safe and fun environment.

The educational IronBot robotic cat can be used to assemble three kinds of robotic projects that include a robotic arm, biped robot and humanoid robot.

IronBot is a 3-in-1 DIY robot-learning kit, which can be assembled robotic arm, biped robot or humanoid robot by kids age 8 and up. Kids can set robot’s movement track and let it act according to personal setting, like the widely used robots in plant. When kids finish humanoid robot assembly, they can directly put smartphone on robot’s head as his brain. Then he will become an intelligent robot who can listen, speak and act, being like a new friend who can talk, dance and play with kids.

By Xlink graphical programming in APP, kids can program and design robot’s thinking. Kids can use simple graphic module combinations to edit X different kinds of thinking logics and reactions, which will arouse kid’s imagination and train their logical thinking. Every kid can DIY IronBot as preference by setting its name, character, voice and expression and create a unique IronBot belonging to him/herself.

Jump over to the Indiegogo website via the link below for more details and to make a pledge from $89.