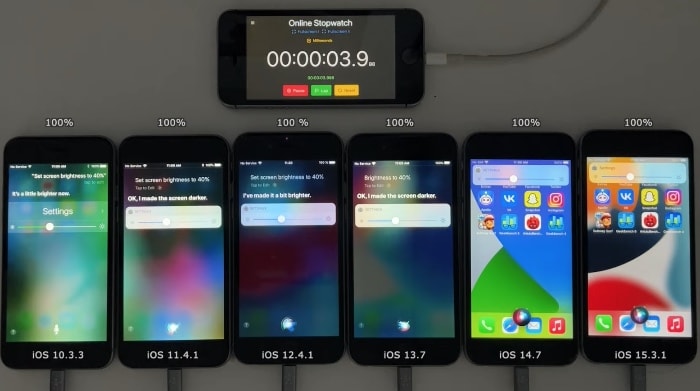 The iPhone battery life is tested on the iPhone 6S and each of the handsets have been given a brand new battery, so this means that all the device are tested under the same conditions.

As we can see from the video there are two iPhone battery life tests, one running normal apps to show what a normal day of use would be like. The second is the Geekbench battery test.

There was a difference of 1 hour and 41 minutes between the device running iOS 11 and iOS 15, which is quite a big difference.

In the second test with Geekbench, the handset that lasted the longest was the device running iOS 14.7, this was followed by iOS 12.4.1, then iOS 15.3.1, then iOS 11.4.1, iOS 13.7, and finally iOS 10.3.3. It is interesting to see the difference in the iPhone battery life between the first test and the Geekbench test.