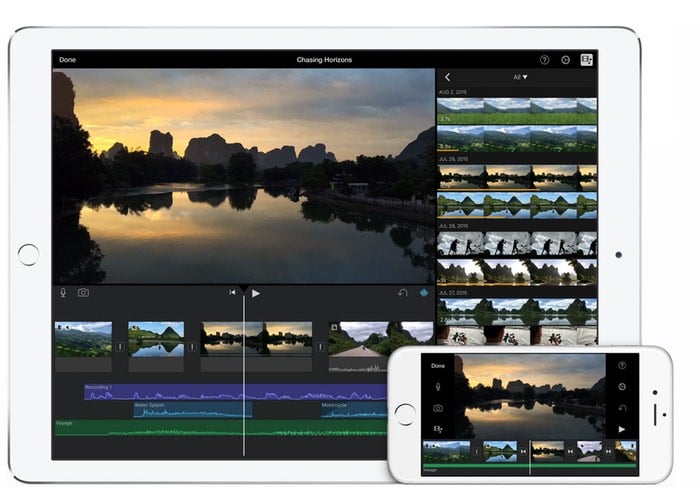 As well as launching their new iOS 9 mobile operating system yesterday, Apple has also released a new update for its iOS iMovie application which has brought with it a number of new features, tweaks and enhancements for users to enjoy.

One major new addition to the iMovie application now offers the ability for users to edit 4K Ultra HD footage directly on the new iPhone 6s, 6s Plus or iPad Pro Apple hardware.

Unfortunately Apple has not enabled the ability for the iPad Pro to capture 4K video footage unlike its smaller new iPhone 6S devices however the larger iPad Pro will allow users to edit multiple four case streams simultaneously. With the video viewer capable of showing full 1080p within its editing window.

In addition to the new 4K support is available on iPhone 6s, iPhone 6s Plus, and iPad Pro devices, new features within the latest version 2.2 iMovie iOS application rolled out by Apple this week include :

• Create and share movies at stunning 4K resolution (3840 x 2160) on compatible iOS devices *
• Create and share movies with 1080p HD video at 60 frames per second for smoother, more true-to-life action
• Use 3D Touch on iPhone 6s and iPhone 6s Plus to quickly start a new movie right from the Home Screen
• Desktop-class performance on iPad Pro with the ability to edit multiple streams of 4K video and use shortcuts with the Smart Keyboard
• Enhanced interface on iPad Pro with full-height Media Browser and pixel-for-pixel 1080 HD Viewer
• Connect a keyboard and use simple shortcuts to edit movies quickly
• Option to hide Media Browser while editing a movie
• Option to disable Ken Burns animation on a photo
• Redesigned Project Details view lets you watch movies and trailers before opening them
• Redesigned Video view lets you see more of your library while browsing videos and photos on iPad
• Improved Inspector controls with easy-to-read text labels on iPad
• Support for Slide Over and Split View when multitasking with the iMovie Extension for Photos
• Redesigned Audio browser in the iMovie Extension lets you easily browse and hear music
• Performance and stability improvements
• Support for Canadian French, Hindi, and Traditional Chinese (Hong Kong)

Jump over to the iTunes App Store for more details.