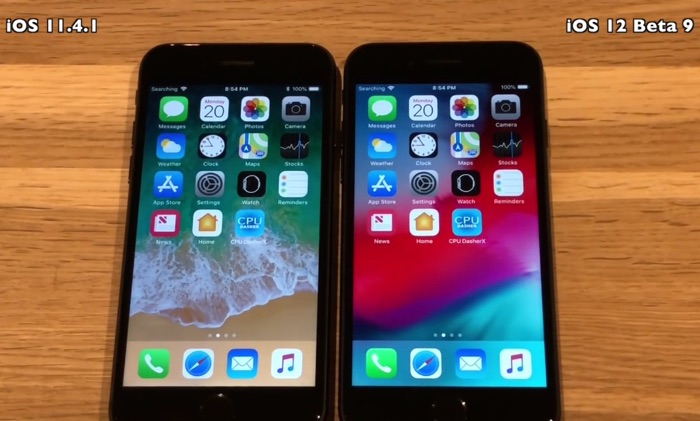 Apple just released their ninth beta of their iOS 12 software and now we have some speed tests of iOS 12 Beta 9 vs iOS 11.4.1 .

One of the main focuses of the new iOS 12 is to bring speed and performance improvements to existing Apple devices, this includes older devices. Now we have some speed test videos where the iPhone 5S, iPhone 6, iPhone 6S and iPhone 7 are tested running both versions of iOS, first we have the iPhone 5S.

As we can see from the video the iPhone 5S running the iOS 12 beta 9 software booted up quicker, there also appear to be some speed improvements in the apps, next is the iPhone 6.

With the iPhone 6, the device running the iOS 12 beta 9 booted up faster, it also appears to be faster in various apps. Next up is the iPhone 6S.

As we can see from the video the handset running the new beta of iOS 12 booted up quicker than the iPhone 6S running the iOS 11.4.1 software, there also appears to be some speed improvements in some apps, finally we have the iPhone 7.

With the iPhone 7 the handset running the device running the current iOS 11.4.1 booted up a split second faster than the iPhone running the new beta. The two devices appear to be about the same in the apps. It looks like Apple’s plans for speed and performance improvements in iOS 12 is working, the plan is designed to speed up older devices. We are expecting the new iOS 12 software to land next month with the new iPhones.