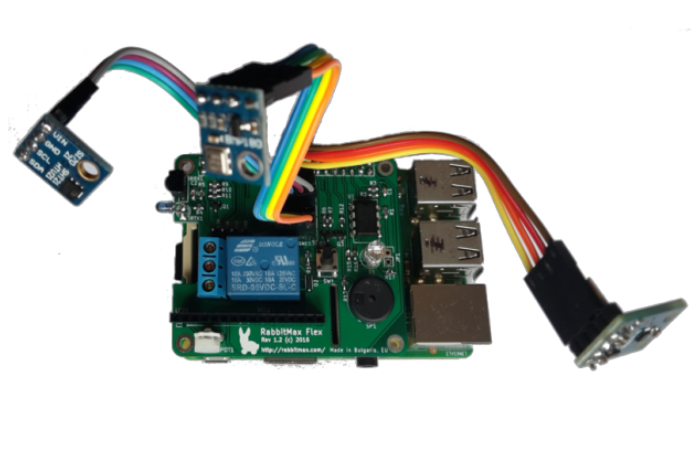 A new open source Raspberry Pi HAT has been launched via Indiegogo this week which has been created by Leon Anavi based in Bulgaria, and specifically designed for the Internet of Things and home automation applications.

Watch the video below to learn more about this new open source hardware and software bundle. Which can be assembled without the need for any soldering and is perfect for rapid prototyping Internet of Things applications and projects.

The RabbitMax Flex supports 1602 LCD display modules equipped with a HD44780 controller and is capable of showing up to 16 characters on each of the two rows. Features of the RabbitMax Flex include:

Getting started with RabbitMax Flex is super easy. No soldering is required. You can assemble the kit with your bare hands and start using it immediately on Raspbian, the most popular GNU/Linux distribution for Raspberry Pi. Comprehensive user’s manual is provided. Out of the box it supports sensors for temperature, humidity, barometric pressure and light. Free and open source examples written in Python and C are available in GitHub.

Yes, RabbitMax Flex Raspberry Pi HAT is suitable for you if you are an existing Raspberry Pi owner interested in home automation, software development and Internet of Things (IoT). The board is appropriate for embedded programming enthusiasts, GNU/Linux gadget fans, students as well as web and mobile app developers.

The main usage of the board is embedded software development without the urge of understanding perfectly the hardware. RabbitMax Flex is a general purpose Raspberry Pi HAT. It is useful for building Do It Yourself (DIY) projects like: weather station, desk assistant or just rapid prototyping of Internet of Things (IoT). For optimal performance it is recommended to get the IoT Developer Kit.

For more information on the new RabbitMax Flex jump over to the Indiegogo website for details by following the link below.