The spider bot can move around autonomously and can perform basic emotions. Matt hopes by adding artificial intelligence these emotions can then be taken to the next level. With Intel’s interest in his creation I’m sure that won’t be too far into the future. Check out the video below to see the spider bot in action. 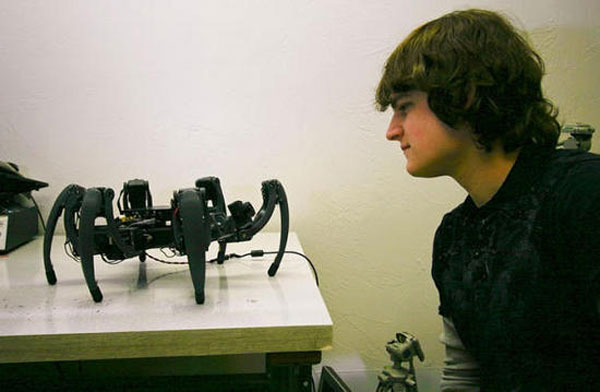 The spider bot is based on an Intel 1.6GHz atom processor and has a web cam to help its movement which isn’t per-programmed. The design of the spider bot allows it to move over any terrain and even if one of its legs becomes inoperable spider bot would still be able to balance and moved steadily.

One of the things I wanted to explore was the idea of reinforcement learning. What I wanted to do was not preprogram any of those walking algorithms, I wanted it to figure out how to walk straight forward on its own,” Bunting said. “It has the ability to figure it out itself.

Matt’s professor says the bot’s learning algorithm can be applied to tasks other than walking. If a leg breaks or a motor gets damaged, for example, it can relearn how to walk. The robot even has foot contact sensors that can be used for terrain adaptation.

Matt’s spider bot creation has created a stir in the tech world with many companies offering free equipment and exposure in exchange for his skills.