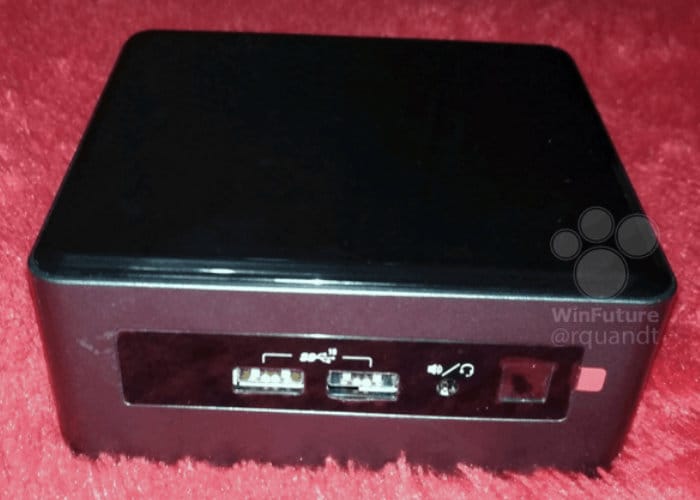 It has been revealed this week that a new Intel Crimson Canyon NUC mini PC could be making an appearance very soon equipped with a Cannon Lake-U processor and AMD Radeon 500 graphics. At the current time no official news or confirmation has been released by Intel but the WinFuture website has discovered a few images providing a first glimpse of the unannounced Crimson Canyon NUC, which unsurprisingly looks very much like existing NUC mini PCs.

Intel has already created different NUC mini PCs equipped with both Intel Kaby Lake-G processor with an AMD GPU, but the new Intel Crimson Canyon NUC is the first with both AMD GPU and Intel CPU in the same system. Other features of the new mini PC include options for either 4 GB or 8 GB of memory, a 2.5-inch hard drive, together with connectivity provided by built-in Wi-Fi 802.11ac, and Bluetooth 5.0 support.

The Tech Power Up website explain a. Little more about the discovery. “It’s highly unlikely that we will find the CPU and GPU on the same chip like the one in the Hades Canyon NUC. Instead, the GPU will probably be soldered directly to the motherboard itself. The Intel Core i3-8121U models (NUC8I3CYSM2 and NUC8I3CYSM3) start around 450 euros, which roughly translates to $550.” Unfortunately, official no information on pricing or worldwide availability has been released as yet for the new Intel Crimson Canyon NUC, but as soon as information comes to light, we will keep you updated as always.