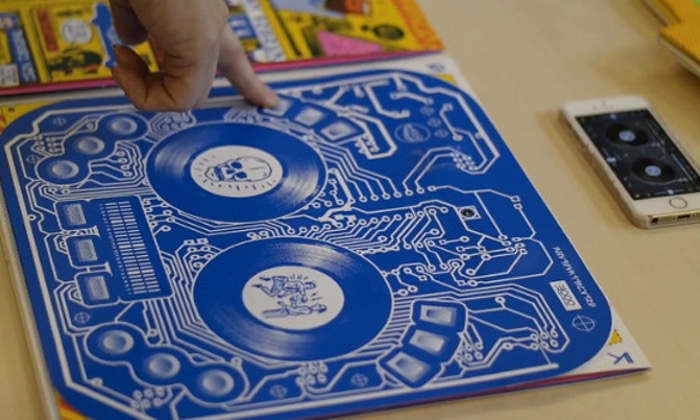 Novalia has created a new and innovative album cover that can be used as an interactive DJ controller connecting wirelessly to your iOS smartphone using Bluetooth connectivity.

The album cover has been created for DJ QBert and provides owners with a set of fully functional Bluetooth MIDI decks and controls. Check out the demonstration video below to see the very unique album cover in action.

Originally the idea for the album cover was crowd funded by a successful Kickstarter campaign back at the beginning of 2014 which raised over $120,000 to collaborate with Algoriddim’s DJay app and Novalia’s touch technology, transforming the record’s gatefold cover into a Bluetooth DJ controller. Its creators explain :

“To come up with up the most captivating and innovative album packaging, we teamed-up with Brooklyn-based Morning Breath, Inc. Morning Breath is Doug Cunningham & Jason Noto. Over the past decade the two have combined their talents to create graphics for many recording artist, apparel & products, as well as many solid ad campaigns.

The duo is looking to raise the bar on the album artwork for this project. “Our goal is to match QBert’s artistry from a visual point of view, and leave the fans with one of the most exciting album packages to date.”

With DJ QBert’s partnership with Algoriddim’s DJay app and Novalia’s capacitive touch technology collaboration, Thud Rumble was able to conceptualize and develop the WORLD’S FIRST INTERACTIVE ALBUM PACKAGING. With this innovation, the album’s gatefold cover is transformed into an actual DJ controller.

By accessing DJ QBert’s album (or any MP3) through the DJay app, you’re able to manipulate and effect the songs with the use of the built-in controller. This feature will be available for both vinyl and CD packaging. :D”

For more information on the new DJ QBert album cover jump over to the original Kickstarter website for details via the link below.