It seems like every time you turn around NASA is offering up some incredibly beautiful images taken from various locations in our solar system. Some of my favorite images that NASA offers up are those taken by the various spacecraft in orbit around other planets in our solar system. The most recent series of pictures posted by NASA are natural color images taken by the Cassini spacecraft. 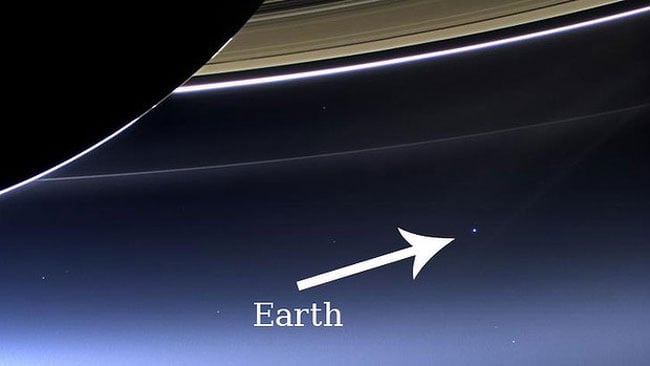 Cassini is currently in orbit around Saturn and is approximately 1.44,000,000,000 km from the Earth. If you’ve ever wandered outside and looked up at the stars in an attempt to locate some the other planets in our solar system, you’ll appreciate this image. What you can see in this image labeled by the arrow is what the Earth looks like from orbit around Saturn.

Perhaps unsurprisingly Earth is nothing but a bluish dot in space, which is basically how we see Saturn from Earth. You can also get a very clear backlit image of a section of Saturn’s rings. In these pictures, the sun was hidden behind Saturn allowing for a highly detailed image of Saturn’s ring system.