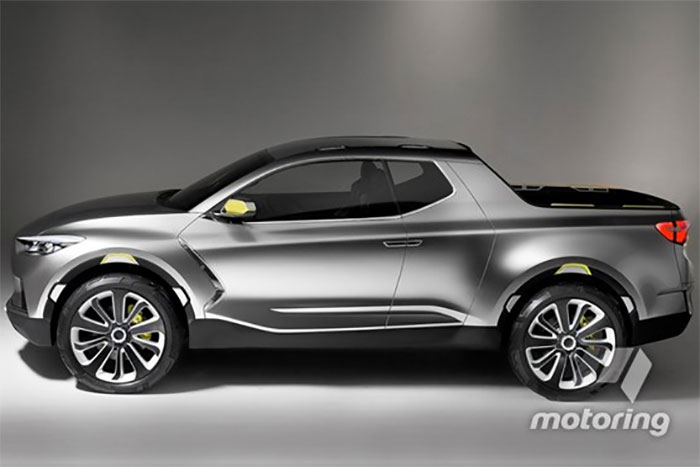 The first time we saw the Hyundai Santa Cruz truck was back in January 2015 when the concept was unveiled in Detroit. This year at the Detroit auto show the Santa Cruz was back and the head of Hyundai USA Dave Zuchowski made statements indicating that the truck will go into production.

“It hasn’t been officially announced yet. Our timing is not crossing our fingers and waiting for approval, it’s trying to figure out when we’re going to announce it,” he said. The Santa Cruz looks part truck and part car and won’t compete on even ground with other mid-size trucks. The truck will use the same platform that the compact ix35 crossover was going to use before being cancelled.

Hyundai has said that towing capacity, payload, and ground clearance were not the main concerns when designing the Santa Cruz. It’s sort of like a modern Subaru Brat without the seats in the bed of the truck. Hyundai is targeting buyers who would otherwise drift to CUVs or SUVs and is positioning the Santa Cruz as a lifestyle vehicle not a truck for hauling or towing.

“Santa Cruz, by design, isn’t an alternative to a truck, so towing, payload and ground clearance were not primary goals,” said Hyundai Motor America director of corporate planning Mark Dipko on the concept’s debut last year.