Unfortunately due to a lawsuit by Apple, HyperMac will no longer be able to supply power cables for its external battery packs. Apple offers licenses for its 30-pin connector so that accessory makers can sell products to go with Apple’s iDevices, but the company keeps the MagSafe connector to itself

The HyperMac brand recently added connectors to its batteries to allow users to charge their iPads through Apple’s 30-pin connector, so the same battery can service both your MacBook and your other Apple portable devices. 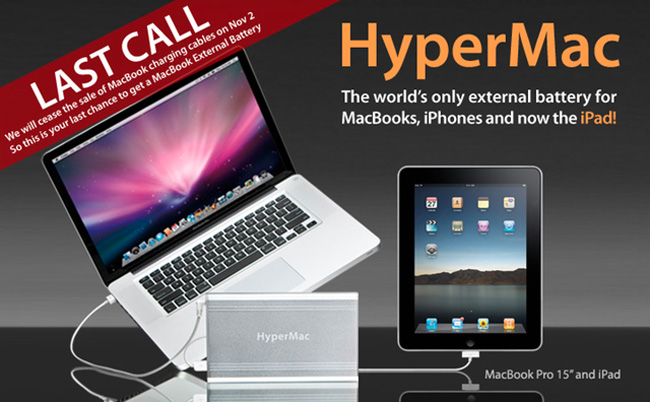 Apple sued Sanho Corporation, HyperMac’s parent company, in early September, alleging violations of Apple’s MagSafe and 30-pin iPod connector patents. The lawsuit resulted from HyperMac’s popular line of batteries that could charge any MacBook or MacBook Pro, or an iOS device with the 30-pin connector.

Apple said the company had violated six of Apple’s patents related to both technologies, and that Sanho’s alleged infringement caused damage to Apple’s business

If you are thinking of purchasing a HyparMac external power supply now could be a very good time to invest in one.