Earlier today we heard that the HTC M7 will launch as the HTC One, we previously heard that the handset will come with a 13 megapixel camera and will feature some new camera technology.

Now it would appear that a photo taken with the new HTC One (M7) has appeared online, you can see the photo below along with the Exif data, and it gives us some more information about the new camera on the HTC One. 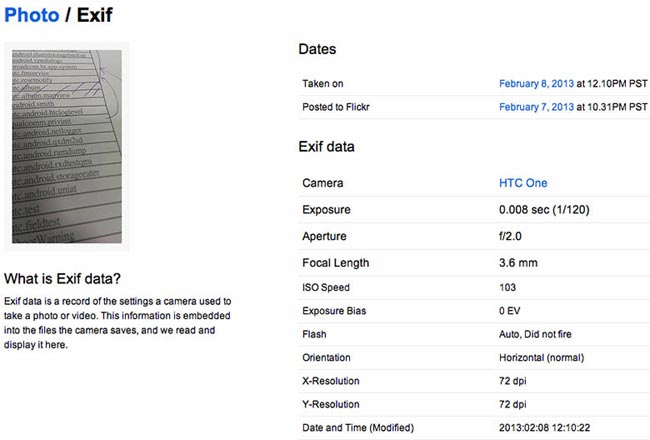 The HTC One is rumored to feature a camera which is made up of ‘ultrapixels’, basically the camera will feature three 4.3 megapixel sensor layers, one on top of the other, giving the device a 13 megapixel camera.

Other rumored specifications on the new HTC One include 4.7 inch full HD display with a resolution of 1920 x 1080 pixels and will also feature HTC Sense 5.0 plus 4G and NFC, the handset is also expected to come with Android Jelly Bean.

HTC are holding their Mobile World Congress press conference the week before MWC 2013 kicks off on the 19th of February, and we are expecting them to officially announce the HTC One or HTC M7 then.