Owning a phone for a long time means you also have a lot of files stored in it. What if you decided to buy a new phone? You might need to transfer those files from the old phone to the new phone, right?

But, phones don’t have such kind of default app that could transfer data. So, you would actually need a third party tool that could help you with how to switch data from old phone to new phone. And luckily, there are apps for transferring files that could be available online making things a lot easier on your part.

There are several tools commonly used to switch data between iOS and Android devices: Move to iOS, Samsung Smart Switch, Google cloud, iCloud, etc. But they have two outstanding disadvantages: inconvenience to transfer files between different OS platforms; only supporting to transfer data from old phone to a targeted phone of specific brand manufacture like Samsung Smart Switch. Smart Switch users also complained about issues of not compatible and connecting.

However, a brilliant alternative to Samsung Smart Switch is the dr.fone – Switch. It’s a specially designed phone transfer tool to make the phone switch between mobile platforms such as Android and iOS. With it, you can transfer music, videos, contacts, SMS, calendar, photos, apps and call logs to and from Samsung phone and tablet, from other Android phones to iPhone, or from iPhone to Android. 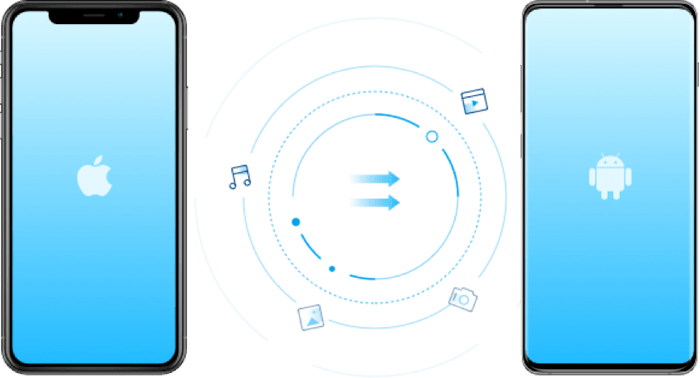 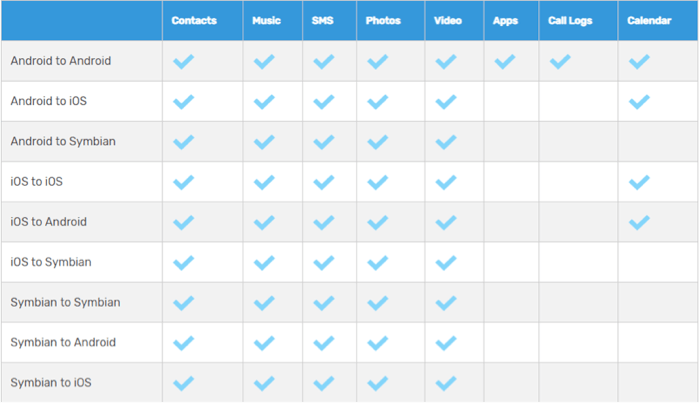 Let’s now take a further look at how you could transfer your files from one phone to another:

Well, you should give credits to Google’s cloud services which make it a lot simpler to transfer all your data and apps to your new Android phone, particularly the newer versions from Lollipop to Oreo.

Most manufacturers of Android phones include custom migration tools in the phones for this matter. You only need to follow the instructions as you first set up the new phone. Recently, Android phones would just ask you to put the phones near each other and link them through NFC.

And as you see the prompts, just choose the data that you want to transfer. As the prompt appears on the screen of the old phone, click the “OKAY” button and the transfer will already begin. A message would appear on the new phone saying that the process is complete.

On the other hand, take note that the above method might transfer the data and apps, but it wouldn’t move your locally stored files, videos or photos. If this is the case, you can easily resolve this by the help of Google Photos and Google Drive.

To do so, go to Google Settings then Google Photos Backup and simply enable it. You should also be aware of the length restrictions on videos once you upload them at high quality than the original size.

And for other files, simply go to Google Drive app then tap the “+” button right at the bottom part of the screen and hit UPLOAD. You can also choose to upload files from the device with the use of a simple browser.

After uploading everything, just set up Google Drive and Google Photos on your new Android phone. Indeed, everything will already be available on the new device and you could already access the personal files from the old one to the new one.

How about upgrading your iPhone to a higher model, how are you supposed to transfer your files now? Well, say thank you to iCloud for a painless way of switching data from the old iPhone to the new iPhone.

Before you start up your new iPhone, check first the old one to ensure that there is a recent iCloud backup. You have to go to Settings then iCloud then Backup. Once the backup isn’t new enough, simply tap the “Back Up Now” option.

And now, you could start the setup process on your new phone. After entering the iCloud account information, you would be prompted to either set up the phone as new or restore from a backup. Of course, you are going to choose the latter.

Make sure that you choose the right backup from your old iPhone. And there you have it, your new iPhone would be populated with all the files coming from the old phone! You will not have to worry about how to transfer photos from iPhone to iPhone because it’s been made easier!

What if you are sick of Android phone and you want to buy an iPhone instead? Would you still have second thoughts just because you are too worried about the files you have on the Android phone? That shouldn’t be the case! Worry no more since you can easily switch your data from Android to iPhone now.

For example, you chose iOS 9 as your new phone. Apple offered the Move to iOS App for Android which would shuttle most of your content to an iPhone and install them to iOS versions too. Too worried about how to transfer contacts from android to iPhone? Well, this app would transfer the contacts, calendars, email accounts, videos, photos, message history, bookmarks and more.

How about vice versa? You want to transfer files from your iPhone to an Android phone. Yes, the process might also be a bit complicated but it’s always worth it anyway.

We all know that Google doesn’t have that automated transfer app like the one from Apple, right? However, if your new Android phone comes from among the major manufacturers like Motorola or Samsung, things could be done conveniently.

Say, for instance, Samsung has the ever-popular transfer tool, Smart Switch, that would even look for the Android counterparts of iOS apps then aid you download them as well. Unfortunately, if the phone company doesn’t have such kind of an app, transferring files manually could still be possible.

Nevertheless, if you are too eager to find such a tool that will help you copy everything from a phone to another, dr.fone – Switch is simply a great recommendation. Well, with just a click, you can do the transfer as easy and as fast as that! With this, you could move data between devices like from iOS to Android or vice versa, transfer almost everything and it is compatible with Android 9.0 and the latest iOS 12.2 as well. You shouldn’t doubt the ability of such a great tool!

Indeed, buying a new phone is exciting, however, if you value the files from the old phone, you should know some of the best methods on how to switch data from old phone to new phone. I hope this article helps you a lot!