Today Honda has unveiled their new ASIMO robot building on the previous model that was launched 10 years ago. New advancements in ASIMO design and technology now allow it to kick balls, hop on a single leg and even now make it capable of predicting the direction a person will walk allowing it to avoid collisions.

The new version of ASIMO has also been equipped with significantly improved intelligence and the ability to adapt to situations. Watch a few videos of ASIMO in action after the jump 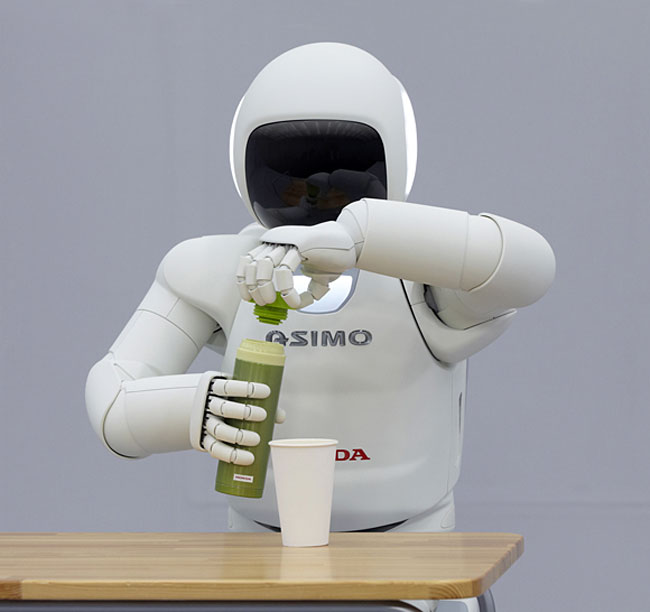 “ASIMO is now capable of predicting the direction a person will walk within the next few seconds based on information from pre-set space sensors and quickly determining to take an alternate path to avoid a collision with the person if the estimated locations of the person and the ASIMO intersect.”

” Three factors were identified as necessary for a robot to perform as an autonomous machine, and the technologies required to realize these capabilities were developed;

1) high-level postural balancing capability which enables the robot to maintain its posture by putting out its leg in an instant,

2) external recognition capability which enables the robot to integrate information, such as movements of people around it, from multiple sensors and estimate the changes that are taking place, and

3) the capability to generate autonomous behavior which enables the robot to make predictions from gathered information and autonomously determine the next behavior without being controlled by an operator.”

More information can be found over on the official press release on the Market Watch website.