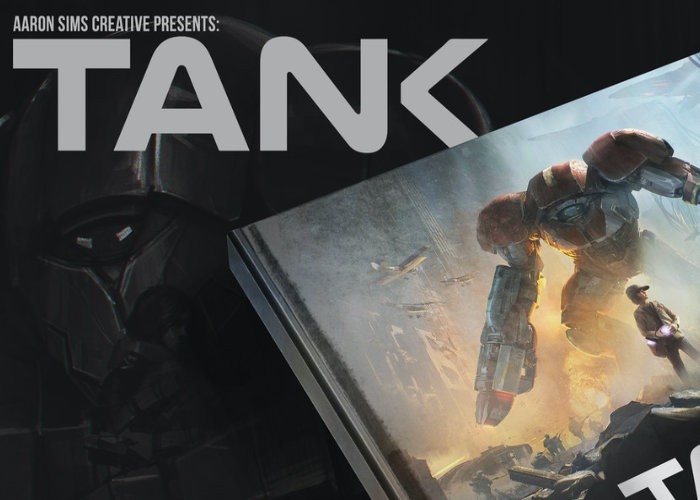 Aaron Sims Creative and 3DTotal have launched a new science-fiction graphic novel called TANK by Kickstarter this week with aim of raising the required funds needed to take the concept into production. Founder Aaron Sims began his career over two decades ago as a special effects artist. Bringing together some of the world’s most talented visual effects and concept artists, in 2005, Aaron Sims Creative was formed. As the mastermind behind some of the most iconic movie creatures of all time, his pioneering techniques in the world of visual effects cemented his position in cinematic history says the press release.

Backer early bird pledges are now available for the interesting project from roughly $33 or £26. If the TANK Kickstarter campaign is successful and the project completion progresses smoothly, worldwide shipping is expected to take place sometime around February 2021. To learn more about the TANK project view the promotional video below.

“Hello, I’m Aaron Sims from Aaron Sims Creative, where we have been creating monsters and visual effects for TV, games, and movies for over 20 years. From my early days working on the Nightmare on Elm Street movies and Evil Dead 2 to creating the visual effects for Stranger Things, Ready Player One, Wonder Woman, and more, it all starts with inspired artwork. We are lucky to have so many excellent artists working with us at ASC, and I have been wanting to put a book together for a long time.”

“Join protagonists Max, a wily street kid, and TANK, a decommissioned military robot, as they are thrown back in time to World War One where they must defeat a cold-blooded scientist to preserve the future of humanity from the reign of an aggressive alien race. Although this science-fiction story is action-packed and out-of-this-world, it is ultimately a classic tale of friendship.”

Please note that as this is a live project, all designs are subject to change. For a complete list of all available pledge options, stretch goals, extra media and specifications, jump over to the official TANK crowd funding campaign page by following the link below.