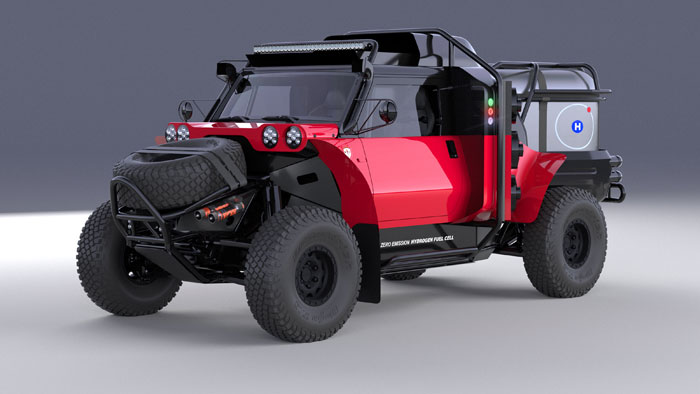 Glickenhaus has published a new press release celebrating the hydrogen-powered racing vehicle that will take on the infamous Baja 1000. The vehicle is a version of the Baja Boot we have seen in the past with a key difference. Rather than being powered by a traditional combustion engine, this vehicle is powered by a hydrogen fuel cell.

The press release talking about the vehicle is quite strange, but there are some tidbits about the racing vehicle strewn in. It’s a cryogenic supercritical hydrogen fuel cell electric race vehicle. Glickenhaus says it’s the first-ever zero-emissions Baja 1000 racing vehicle. Much of the press release takes jabs at automakers who believe battery electric vehicles of the future.

However, as Glickenhaus points out, the Baja 1000 is grueling. There’s no way a battery electric vehicle could compete because the distances are too vast, and charging would be impossible. The company calls the hydrogen Baja Boot the future of transportation, particularly for larger vehicles such as semi-trucks, pickup trucks, and more. Buried in the rambling PR is a tidbit that the company plans to make a road-legal version of the vehicle. However, it would appear that the vehicle hasn’t been tested as of now.