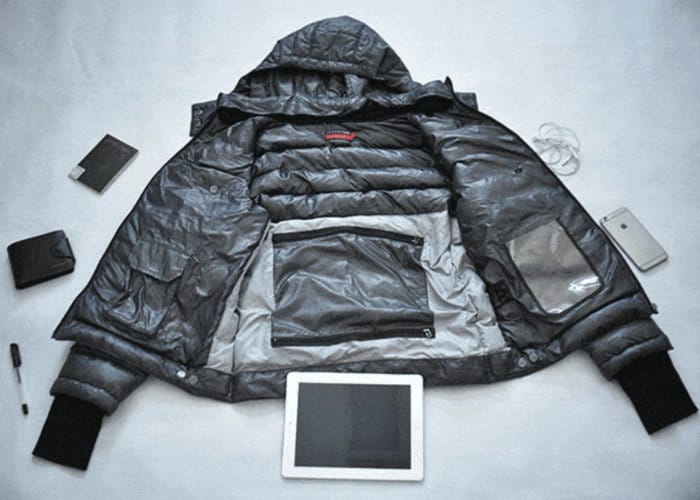 If you would rather not carry a gadget bag but instead carry everything you need in your jacket pockets you might be interested in a new gadget jacket called the GIGA, which is capable of carrying iPads smartphone’s headphones passport and more. The GIGA gadget jacket has this week launched by Kickstarter and includes a concealed scarf, detachable eye mask, detachable hood and detachable winter mask as well as a wealth of pockets allow you to carry all your gadgets with ease. Watch the demonstration video below to learn more about the GIGA and its “16 amazing features” all of which are available to back by its Kickstarter campaign, where pledges start from £78 or roughly $109 for early bird backers.

The GIGA jacket is filled with 90% white duck down 10% white duck feather and is fitted with a two-way water resistant zipper making it easier to access the GIGA’s internal pockets and is finished with a fine denim print. When not in use the jacket can be converted into a bag and also a travel pillow if required.

For more information, full specifications and a list of all available Kickstarter pledges jump over to the official campaign page by following the link below. If all goes well and the Kickstarter campaign is successful shipping of the GIGA jacket is expected to take place during September 2018.