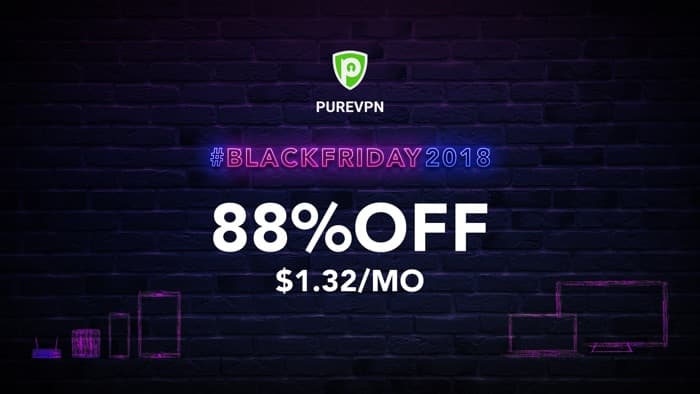 The craziest shopping season has finally kicked off, and so have the VPN deals that we all have been waiting for.

If you are also looking for an insane Black Friday VPN deal, don’t look any further because PureVPN has an offer that you can’t refuse. The elite player in the industry, PureVPN, boasts dynamic features & functionalities that help you leave no trail while browsing the Internet, all the while protecting the integrity of your data against potential data breaches.

Data security and privacy aside, you also get to unblock geo-restricted streaming services and applications, such as VoIP, from anywhere you want.

The VPN provider has a prominent standing in the industry not only because of its feature-rich application but also for its easy-on-the-wallet pricing plans. However, on this Black Friday, PureVPN has gone all out by offering the biggest deal of the year, i.e., FLAT 88% OFF.

A long-term plan means that you buy the VPN once and enjoy optimal Internet security, guaranteed privacy, unlimited downloading, seamless streaming, and better online freedom for years to come.

Don’t worry if you don’t have any affection with long-term plans, because PureVPN also has its 1-year plan in store for you. You can avail the 1-year plan for as little as $4.08 per month, i.e., $49 per year. The 1-year plan is available with a 63% discount.

For users who need a VPN for temporary use, they can check out the 1-month plan which they can grab for $10.95 per month.

Black Friday VPN deal comes every once in a year. So, act now or regret later!