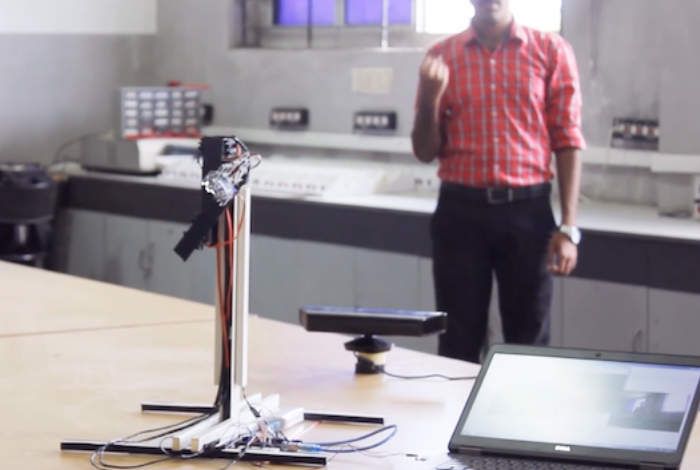 A new gesture controlled robotic arm has been created using a little Arduino hardware together with a Microsoft Kinect sensor the skills of a team of makers.

Details and instructions on how the Kinect sensor Ando Tamino hardware was combined to create the gesture -controlled robotic arm and accompanying servo motors. Watch the demonstration video below to learn more about its construction and functionality.

This is a Simulink Model to Control a Robotic Arm By Gestures that are captured using Kinect Sensor. A Robot Arm is developed using Servo Motors that replicates the Right Arm Shoulder, Elbow and Hand Movements.

Using a Kinect sensor with MATLAB/Simulink and an Arduino, B.Avinash and J.Karthikeyan made a robotic arm to mimic their every move.

If you need a robotic arm to follow your movements, the Kinect sensor is a great place to start. On the other hand, it’s a long leap programming-wise to go from sensor input to coordinated movement of servo motors. Through a toolchain stretching from the sensor itself, to a computer, and finally to an Arduino Mega controlling the servos directly, Avinash and Karthikeyan did just that.

For their process, the computer takes data from the Kinect sensor, then translates it into servo angles using the MATLAB and Simulink computer programs. Resulting data is then fed into the Arduino via a serial connection, which controls the robot’s movements appropriately with a slight delay.