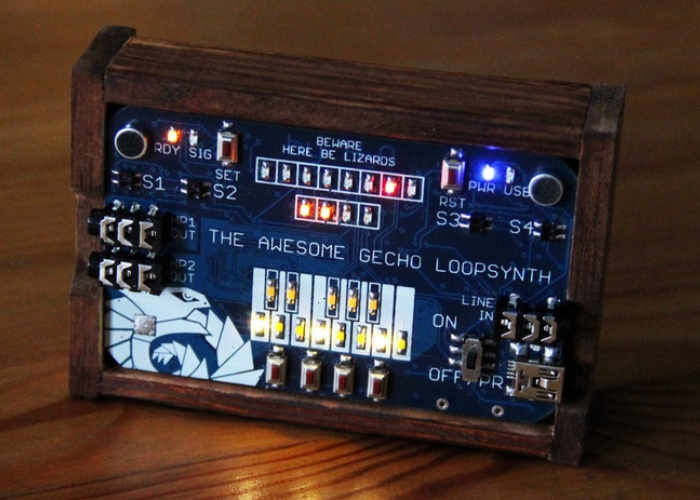 The Gecho Loopsynth takes the form of a modern music box equivalent says its creator and is equipped with a number of programming features allowing you to generate your own tunes using buttons, a magnetic ring, tone recognition via microphones, and tone recognition via an in-line port which can be connected to an electric guitar or other musical instrument.

Watch the demonstration video below to learn more about the Gecho Loopsynth which has launched via Kickstarter this week to raise the €24,000 it requires to go into production. It’s creator explains more :

In music box you’ve seen gears, steel comb and cylinder with pins.  Gecho doesn’t try to hide its printed circuit board and some electronic elements. You can touch them – actually, you are encouraged to touch them, nothing will break!

While you can’t see electrons moving in copper traces, there are twenty-nine colourful lights to show what is going on inside… and because interaction is embedded deeply in spirit of today’s technology, even our music box must not stay inert. It can hear your voice, pick frequencies off your musical instruments, remember and play them back to you. It has four sensors to measure distance of your fingers hundred times per second.

It senses magnetic fields and infra-red light, expanding your senses… and knows how to translate these invisible forces to something you can hear. But most importantly, even with the very basic program, Gecho creates unique ambience for your ears.

For full specifications and more details on the Gecho Loopsynth jump over to the Kickstarter crowdfunding website using the link below. The Gecho Loopsynth is available as a DIY kit from just €55 and shipping is expected to take place during April 2017. Fully assembled systems are also available from €96 for earlybird backers with delivery expected to take place a little later during May 2017.