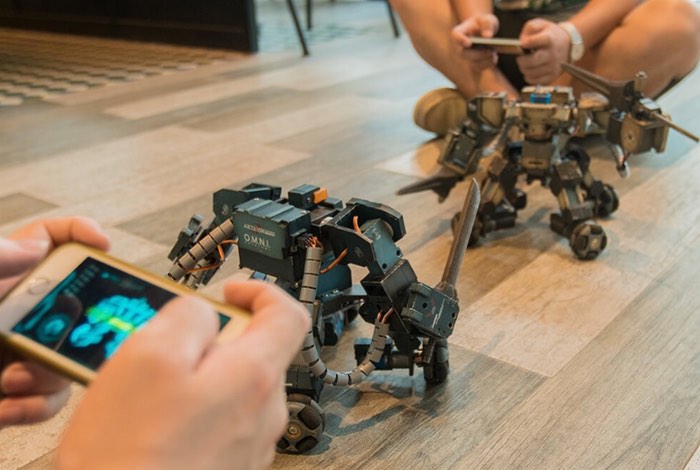 Fighting robots are once again in the limelight this year with the release of the new BBC Robot Wars series rebooting this month, providing robot fighting action via the BBC iPlayer on BBC 2.

If you’d like to engage in little robot fighting but don’t quite have the skills yet to build your very own fighting robot, you might be interested in a new Indiegogo campaign which has launched this month for the Ganker.

Ganker takes the form of a desktop, smartphone controlled fighting robot, which its developers say is the world’s best “robot warrior” and allows you to battle your friends, upgrade your robot and create the ultimate fighting machine without any robotics knowledge. Check out the video below to learn more about the Ganker fighting robot which is available to back with early bird pledges starting from just $249 plus shipping.

Ganker robots are a great hobby for kids and their parents to enjoy together. Ganker teaches kids the principles of engineering and robotics, while keeping parents involved in their children’s interests. The App control system, which can be used on IOS/Android, is so intuitive that everybody in the family will be able to enjoy robot fighting action. It is important to mention that Ganker robots, though designed for intense battle action, are 100% safe for young children.

Show your friends who the true robot master is. No longer do you have to go online or on your phone to engage in futuristic fun with your friends. Instead, bring robots into the real world, and return to the excitement of face to face competition. Duel with your close friends, or bring Ganker robots to the party and make the people cheer with your robotic exploits. Customize your Ganker robot with specialized weapons and armors, then wage epic battles against other robot pilots. Don’t be surprised if your friendly rivalry gets a little heated.

Our vision is to one day host real life robot fighting tournaments. All you will need to enter the tournament closest to you is your own Ganker Robot. Will you join the competition, and risk the agony of defeat for the thrill of victory?

For more information on the new Ganker jump over to the Indiegogo website for details and to make a pledge by following the link below.