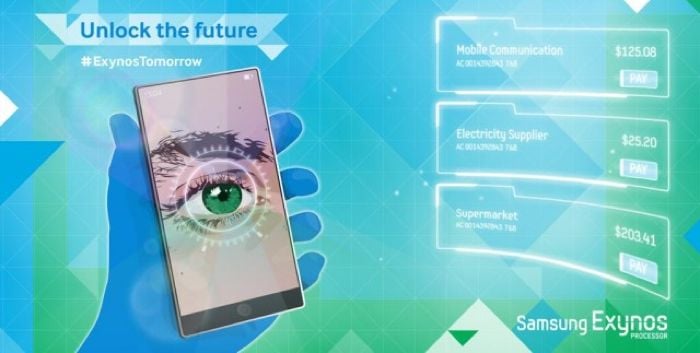 Earlier today we saw some sketches from one of Samsung’s patent filings, the filing was for a new Retina scanner that will be used in the Samsung Galaxy Note 4.

The Samsung Galaxy Note 4 is expected to be the first Samsung device to use a 64-bit processor, the handset is rumored to come with a Samsung Exynos 5433 processor, which is said to be a 64-bit 8 core mobile processor.

Now Samsung has tweeted a teaser photo for the new Samsung Exynos processor, and it features a smartphone with a built in Retina scanner, as we can see from the photo above, it looks like Samsung will also introduce some sort of new payment system.

This new payment system could well use the Retina scanner on the Galaxy Note 4 to authenticate payments, and a retina scanner would be more secure than the current fingerprint scanners on the likes of the iPhone 5S and the Galaxy S5.

Samsung are rumored to launch the Galaxy Note 4 with a quad HD display with a resolution of 2560 x 1440 pixels, the handset is also said to come with 4GB of RAM, and a 12 megapixel rear camera.

We are expecting the new Samsung Galaxy Note 4 to be made official at IFA in September, the handset is also rumored to go on sale globally some time in September.