Android devices had found a large portion of their audience among lovers of diverse hardware offerings, but Google and Samsung are now making it official. The flagship Android 4.0 Ice Cream Sandwich device is taking the ubiquitously humongous screen one step further and doing so in style. It’s also seemingly divesting itself of petty rivalries in the process. This seemed to us like the first Android device not specifically made to compete, but to impress. Which it did, effortlessly. 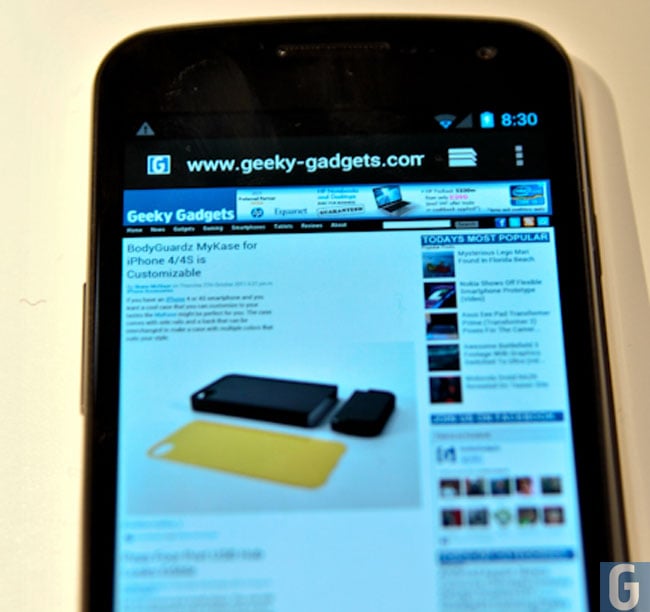 The 4.65 inch screen is just the tip of the iceberg and owed to the fact that the Galaxy Nexus completely forgoes physical buttons, relegating them to pop-up buttons inside the OS. The lack of physical buttons is also part of the reason the Nexus can get away with a behemoth screen size without causing too much of a pocket bulge. Rounded corners, a curved profile and a patterned backplate all combine into a style both very similar and somehow unlike Samsung’s usual take on phone aesthetics.

The NFC functionality we’ve seen demonstrated was nothing short of fantastic. Near Field Communication is the magic sauce Google is adding to Ice Cream Sandwich phones, which allows devices to exchange data simply by touching each other. Sure, the two dudes in the ad Samsung screened who conveniently both happened to own a Galaxy Nexus were having way too much fun bumping their phones to exchange contacts and whatnot, but there’s no denying this is the sort of functionality that captures the imagination.

Ice Cream Sandwich itself was looking mighty fine and everything from the new magazine style menu interface to app data traffic management is pointing to at least as big an overhaul as the rival iOS 5. All in all, there is very little about the Galaxy Nexus that did not outright impress.