Fulton Innovation has this week unveiled a new and unique way to charge your smartphone, by simply lying it on your tablet called Ecoupled. The new Ecoupled system complies with the Qi wireless charging standards, enabling you to use any Qi compatible charging equipment with equipped tablets.

Fulton will be showcasing and demonstrating their new Ecoupled at CES 2013 which is running this week from January 8th -11th. Watch the video after the jump to learn more about the Fulton wireless tablet charging Ecoupled project and see it in action. 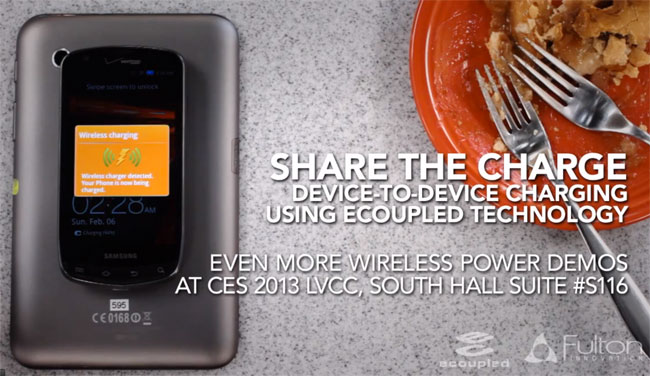 “Fulton Innovation shows a mobile phone charging from a tablet without using any wires. It’s a small glimpse of what the company will be showing at the Consumer Electronics Show in Las Vegas, January 8-11, 2013. This two-way charging feature uses the Qi global standard for wireless power, and is a small taste of new technology developments on display in Fulton’s booth at the show.”