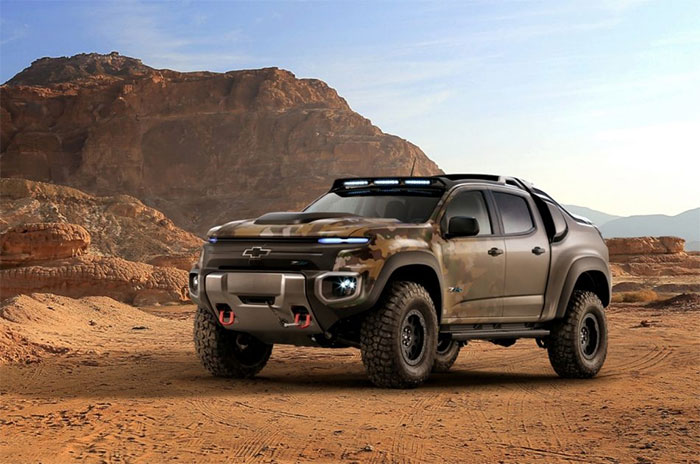 Chevrolet has built a very cool and interesting version of the Colorado mid-size truck aimed specifically at use in the US military. The truck is called the Chevrolet Colorado ZH2 and is an off-road capable fuel-cell powered vehicle. The truck was officially unveiled at the fall meeting of the Association of the United States Army.

The truck is over 6.5-feet tall and seven feet wide and built on a stretched truck platform. It has been reinforced inside and out and uses 37-inch tires and a modified suspension that helps the truck to climb over and ascend all sorts of terrain. The US Army will test the truck in field conditions over the next year to determine how hydrogen-powered vehicles will work on military missions.

The truck features an exportable power take off unit that can use the fuel cell to power activity outside the vehicle. The US Army Tank Automotive Research, Development, and Engineering Center worked with GM to build the truck from contract to concept in less than a year. The truck is being looked at for near silent operation, reduced acoustic and thermal signatures, high-torque at all wheels, low fuel consumption, and water as a byproduct for field use.