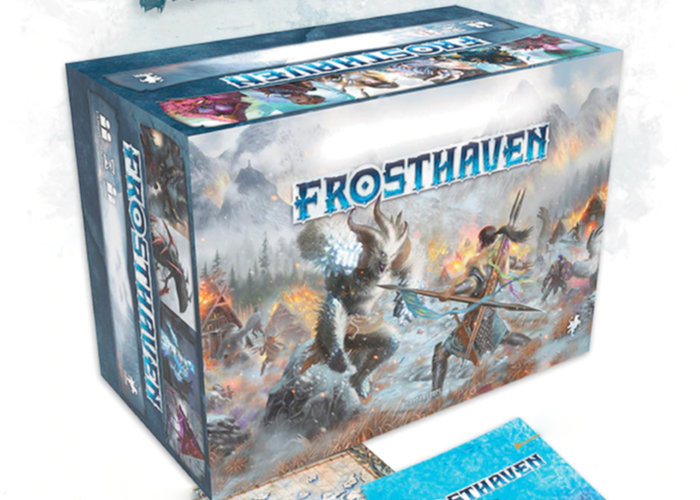 Game designer Isaac Childres has once again return to Kickstarter to launch the sequel to the hugely popular Gloomhaven boardgame. Frosthaven has already raised nearly $5 million thanks to over 32,000 backers in just its first two days. Pledges for the new boardgame start from $100 and provide a Euro-inspired dungeon crawling sequel to the 2017 smash-hit Gloomhaven.

Frosthaven is a stand-alone campaign in the Gloomhaven world, featuring the same award-winning gameplay along with some new twists centred around resource gathering and town building. Check out the overview video to learn more about what you can expect from the new board game, expected to ship during March 2021.

“So let’s start at the beginning, though it’s hard to remember exactly where that is. It feels like ever since I created this world, I wanted to play in it as much as possible. Gloomhaven was just the beginning, and when I thought about other dangerous, wild places, the northern coast immediately came to mind. It felt perfectly natural that we would explore there next.

Since I started designing Gloomhaven, I’ve had ideas on how to expand the mechanics of the system. Stuff from other board games, Kickstarter backers’ suggestions, video games, and my own weird brain. Stuff that would have been cool in Gloomhaven, but I just had to draw the line somewhere or it would never get done. Stuff that ultimately just made more sense and would have more import in this cold, northern region.

One of these things is the new seasonal events and restrictions. I remember when I was first developing Gloomhaven, I had certain scenarios in the campaign that you only had a limited time to complete. You know, like, the demons are attacking the city, and you can’t just go do other stuff for a month and then come back and defeat them. If you didn’t engage with that scenario immediately, something would happen, and it would no longer be available.

These circumstances were more thematic, but they just didn’t feel good mechanically. It was just one more thing you had to keep track of, and coming up with good repercussions for ignoring timed scenarios without it just feeling like an arbitrary punishment was difficult. It just wasn’t important enough to keep in the game, but it stayed in the back of my head and reemerged on Frosthaven.

But I came at it from a different angle. The passage of time wasn’t as important for annoying people with timed scenarios, but would be important for tracking seasons, which would carry far more weight in a cold part of the world.

I decided the best thing to do, for simplicity, would be to split the passage of time into two seasons, which the campaign will cycle through. The game will start at the beginning of summer, where things will, of course, still be cold and miserable. But you’ll encounter events generally on par with events from Gloomhaven. City events will, on average, be good for you, while road events will provide interesting encounters that are more likely to make the next scenario slightly more challenging.

Each time you return to town, though, time will pass. And once time passes 15 times, winter will begin. You will then switch both event decks out for decks of much nastier events. The town will be under constant attack, and venturing outside will become increasingly dangerous. Survive for 15 more passages of time, and summer will then begin anew.”