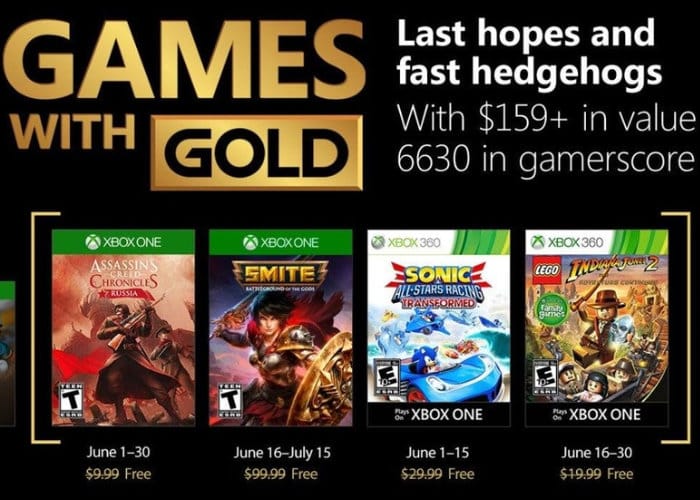 Major Nelson has today announced the free Xbox games that will be available next month to Xbox Live Gold subscribers, with four new game on offer, two on Xbox One and two on Xbox 360 as part of the Xbox Games with Gold program. Thanks to the Xbox One with Backward Compatibility, Xbox One gamers will be able to enjoy the Xbox 360 games as well as the official Xbox One titles on offer.

For the month of June 2018, Microsoft is making available for Xbox Live Gold members, Assassin’s Creed Chronicles: Russia normally priced at $10 for free. Together with the SMITE: Gold Bundle which is normally priced at $100 free to download from June 16th to July 15th 2018. Watch the video below to learn more about all four titles which will be made available next month during June 2018.

On Xbox 360, starting June 1st, Microsoft is making available for free Sonic & All-Stars Racing Transformed normally priced at $30 free to download until June 15th.  Followed on June 16th by the popular LEGO Indiana Jones 2 game normally priced at $20 for free through June 30th 2018. Microsoft explains “Titles are available as free downloads for qualifying Xbox Live Gold members in all markets where Xbox Live is available. Some regions may offer different titles depending on market availability.”