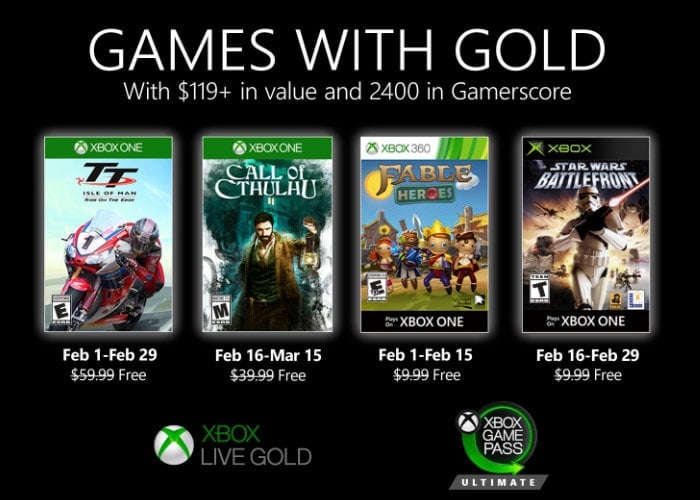 Major Nelson and the Xbox team of today revealed the free Xbox games Gold member subscribers can enjoy during February 2020. Dean Shimabukuro, Sr. Marketing Program Manager at Xbox has taken to the official Xbox Wire website to reveal next month’s free Xbox games , check out the announcement below to learn more about the games with over $119 with a 2400 Gamerscore.

TT Isle of Man
Take on the challenge of Snaefell mountain in the motorcycle racing game, TT Isle of Man. All 37.73 miles of the legendary course is faithfully reproduced in this realistic moto-racing title that will challenge your skills and reflexes. Memorize each section and corner each bend to perfection, all while hurtling along at 180 mph.

Call of Cthulhu
Plunge into a world of cosmic horror and creeping madness in Call of Cthulhu. In the official videogame inspired by the classic pen and paper RPG, investigate a family death on an isolated island where nothing is as it seems. Trust no one in a story filled with strange creatures, weird science and sinister cults, set within the iconic universe of H.P. Lovecraft.

Fable Heroes
Get in on the highly addictive, hack-and-slash adventure title, Fable Heroes. As the heroes of Albion, play up to four players, either competitively or in co-op mode, and collect as many gold coins as you can. Defeat familiar foes and new enemies alike in this fresh spin on the beloved franchise and take playful competition to the next level.

Star Wars Battlefront
Experience an all-time classic with Star Wars Battlefront. Participate in memorable battles from the first six Star Wars films as you fight on the front lines with every weapon and vehicle you see at your disposal. Either by yourself or with an army behind you, the choice is yours to topple the Empire or crush the Rebellion. Note: No online gameplay support.