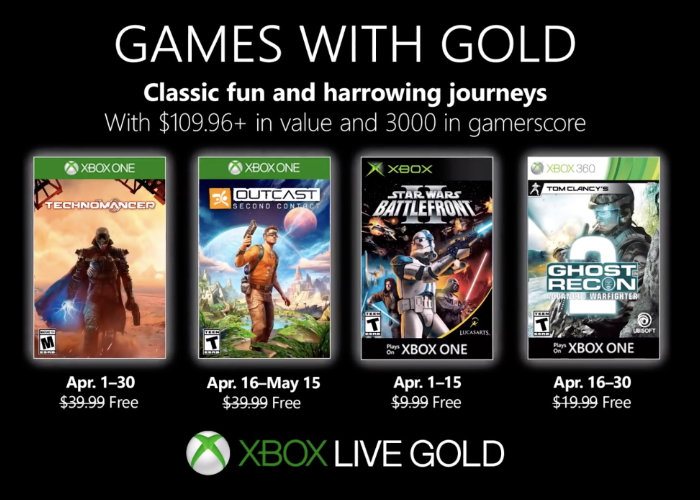 Microsoft’s Major Nelson has today revealed the free Xbox games that will be made available next month, April 2019, for those with an Xbox Live Gold subscription. During the month of April Xbox Live Gold members will receive four new free Xbox games. Following the pattern from previous months subscribers will receive two Xbox One games and two Xbox 360 games that will also be available to play on the Xbox One thanks to Microsoft’s Backward Compatibility feature. Check out the video embedded below to learn more about each of the four Xbox games.

The Technomancer – Take on the role of an ascending mage warrior in the action RPG title, The Technomancer. Feared and respected by all, you’ll develop four different combat skill trees based on three different fighting styles. Craft your weapons, take part in dynamic conversations and explore lost cities as your actions dramatically alter the story and world.

Outcast: Second Contact – Play the complete remake of the cult-classic that started the open world, action-adventure genre in Outcast: Second Contact. On Adelpha, an alien world as beautiful as it is dangerous, explore magic and science and make the right choices to save the destiny of two universes.

For more information on all the free Xbox games being made available Xbox Live Gold members during April 2019 jump over to the official Xbox Wire website.