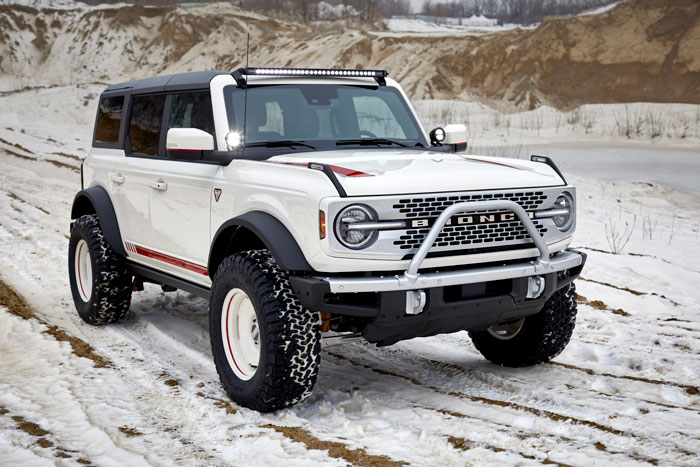 Ford has a long history of building special vehicles and then giving them to Barrett-Jackson to be auctioned off with 100 percent of the proceeds going to charity. For 2022, Ford has revealed the 2021 Ford Bronco Pope Francis Center First Edition, which is a completely customized four-door 2021 Bronco.

All of the proceeds from the auction will be given to the Detroit Pope Francis Center to help fight homelessness. The vehicle is a modern interpretation of a 1966 Bronco modified specifically for use as a Popemobile. The custom 2021 Bronco is painted Wimbledon White and has heritage-inspired wheels from Detroit Steel Wheels.

The vehicle also has a unique Bronco First Edition graphics package in reflective Rapid Red with Pope Francis Center name alongside the First Edition logo on the hood and side of the vehicle. Ford also fitted the custom build with accessories from Ford Performance Parts, including a rooftop light bar, side pod lights, and wheel well rock lights. Ford also includes tube doors, an in-vehicle safe, and other accessories. The auction happens today, Thursday, January 27, at 4:30 PM MST.