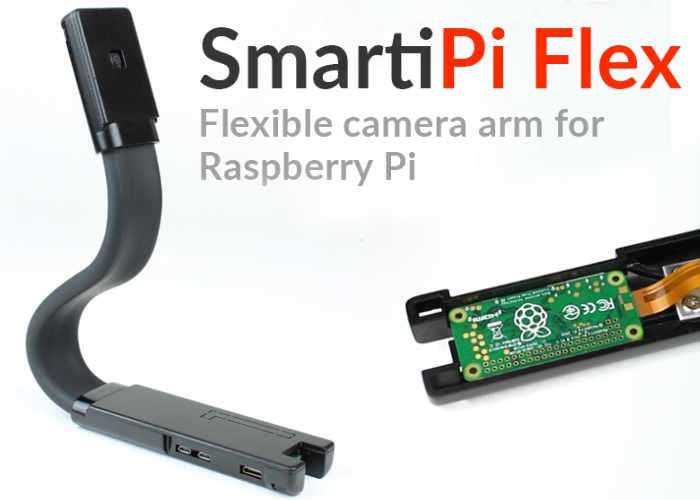 Raspberry Pi enthusiasts looking for a flexible Raspberry Pi camera module mount you are sure to be interested in a new creation by serial Kickstarter entrepreneur Tom Murray in the form of the aptly named SmartiPi Flex case.

Watch the demonstration video below to learn more about the Raspberry Pi flexible camera arm which has been specifically created for the Raspberry Pi camera module and allows you to install either the colour or noir cameras in positions that might otherwise be difficult to reach easily.

Available from just $20 the SmartiPi Flex Basic kit will start shipping during December 2017 if the pledge goal of $23,000 is reached over the next 30 days. Tom explains more about the different versions :

The SmartiPi Flex is an adjustable and repositionable camera arm for the Raspberry Pi Official camera. The aluminum and rubber neck can be flexed to the position you want and it will stay in place. The included cable is run through rubber neck to the camera. Raspberry Pi board and camera are not included. Two versions are available

Both versions have screw mounting, suction cup, and adhesive mounting options to make integration into your application seamless.

For more details and full specifications jump over to the official Kickstarter crowdfunding website page via the link below.