After Felix Baumgartner successfully landed his 24 mile five space jump, data is now being made available from the amazing freefall, which can be used to analyse the extreme exertion on the human body, and the suit worn during the jump. Which many thought would tear apart when it reached supersonic speeds.

The data from Felix Baumgartner’s successfully space jump will now be made available to NASA doctors and engineers, companies developing space taxis and the Federal Aviation Administration, which is overseeing the development of the new spaceflight industry headed out by the likes of Richard Branson and Virgin. 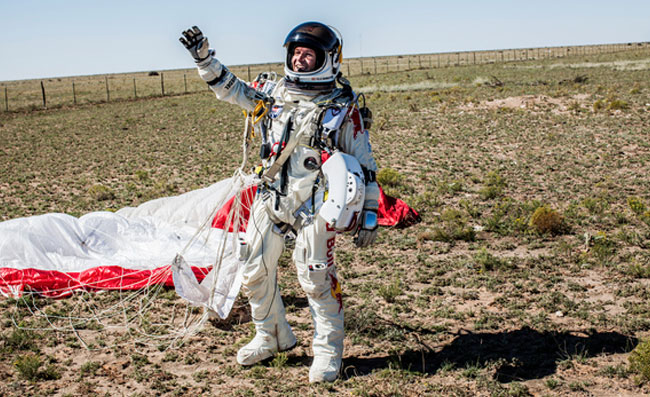 During the jump the specially pressurised suit which has been worn by space shuttle astronauts but not actually tested, was put to the ultimate test as Felix jumped from his 128,097 feet (39,044 meters) high platform. Baumgartner jumped over Roswell, New Mexico, reaching a peak speed of around 833 mph or 1,342.8 kph, with the speed of sound at that altitude being about 690 mph or 1,110 kph.

Felix Baumgartner’s doctor, Jonathan Clark, explained: “Felix demonstrated that you can penetrate the sound barrier,” Mr Clark said. “He didn’t just go transonic, he went supersonic. Going Mach 1.24 is incredible. That is so much further beyond any limit of human endurance. It’s just amazing.”-“Just the physiologic monitoring system that Felix wore generated 50 million data points,”- “We have a massive amount of data to go through.”

Baumgartner added: “It was like swimming without touching the water. I was fighting all the way down to regain control,”- “I had a lot of pressure in my head, but I didn’t feel like I was passing out. I felt like I could handle it.”