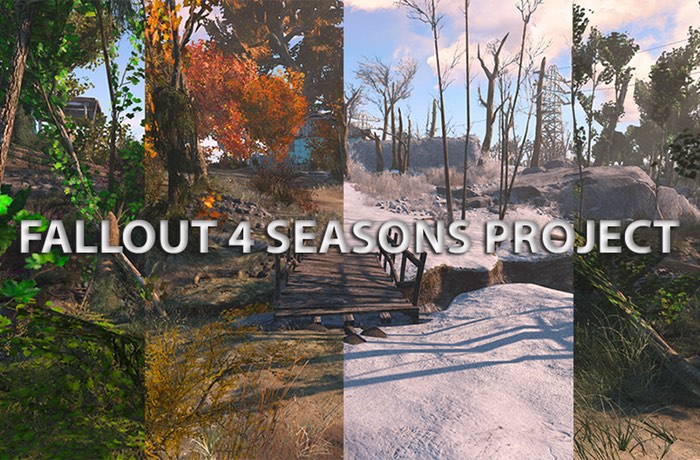 Gamers enjoying playing the new Fallout 4 game may be interested in a new mod called the Fallout 4 Seasons Mod, that has been created by the Fallout 4 modelling community that once installed as different seasons to the game.

Watch the demonstration video below to see all four seasons Grass – Trees – Plants – Snow compared side-by-side and see what you can expect to enjoy once the new Fallout 4 modification has been installed.

Its creator RusalkaC has upload the mod to the Nexus Mods website for your enjoyment and writes :

This Mod may drop your FPS. The Seasons 3.0 packages contain textures ranging from Vanilla to 4k. Further optimization will not be done for now as I believe the files are as balanced as they can be between performance and quality at this time. I do not experience any significant FPS drops with the 3.0 versions and hope you will not either. However, if your computer does not like the packages, my apologies. Just try it and see how it works for you. 🙂

The textures chosen for the Seasons mod were painstakingly hand selected via one by one comparison between the various source mods. Many textures were then also switched around, mixed & matched, recolored, or otherwise tweaked to better suit the season they are in. The result is a complete overhaul for each season with the attempt to make each one distinct and appropriate to a world in which nature has triumphed over the wasteland.

The eventual goal after the Creation Kit is available is to build an optional mod from these packages that will switch seasons automatically. For now, please use only ONLY season at a time and switch seasons as you like. They are ONLY Textures/Meshes and should not hurt your game to install/uninstall at any time. (But please see installation section below about a NMM bug you might experience in uninstalling!)

Jump over to the Nexus Mods website for more details and to download via the link below.