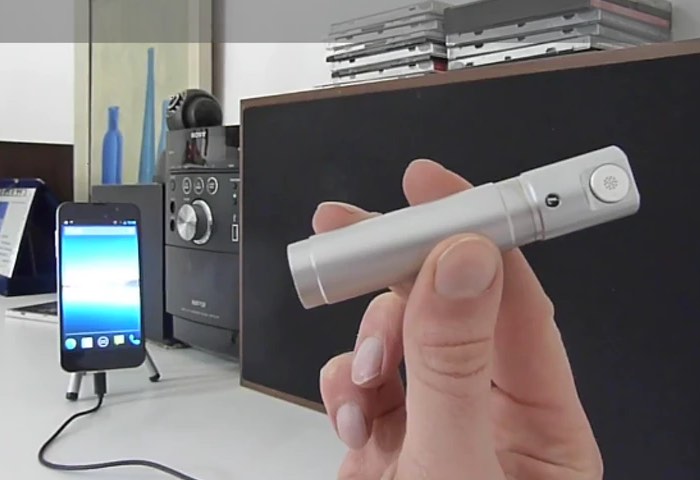 Android users that are looking for a high-quality stereo Android microphone might be interested in a new device called the SS07, that has been created by Optivelox and takes the form of an audio to USB converter which has been combined with a stereo microphone.

Optivelox have designed their Android microphone to allow users to make studio quality recordings using Android tablets and smartphones wherever the user may be.

Watch the video below to learn more about the inspiration, features and functionality of this new SS07 Android microphone which is taken to Kickstarter to raise the €25,000 it requires to make its first production run. Its developers explain more :

One of the bad things about smartphones is that they are generally not very good at audio. Their internal mics are tiny and have a limited bandwidth. Also with good external microphones they may suffer from poor performance mainly due to the filters and noise gates placed in the signal path. Worse, most only support mono recording, not stereo.

Some time ago we started thinking about some sort of accessory that could allow a standard smartphone to operate as a high-quality audio recorder. We liked the idea of going to a concert and being able to shoot videos along with crystal-clear sounds. Today we are going to share with you the results of our efforts. We have developed SS07, an easy-to-use USB adapter able to capture analog sounds and convert them into a digital stream up to 24-bit/192kHz.

We have also developed UARecorder, a lightweight app for Android devices that fully supports SS07. UARecorder takes care of receiving the digital data stream outputted by SS07 and saving it as a WAV file. The quality of the input analog circuitry of a smartphone is not longer an issue here because it deals with digital signals only.

Although SS07 could operate with a wide range of input sources, we designed also a particular mic head; a natural companion of SS07. Actually we are planning to produce two different mic heads. Both heads are equipped with a couple of Hi-Fi, ultra low noise microphones. MIC2 is intended for general purpose applications, MIC3 allows for higher SPL values. You might need MIC3 for very loud sound recordings, for example if the mic is placed close to high power loudspeakers.

For more information on the new SSO7 Android microphone jump over to the Kickstarter website for details via the link below.