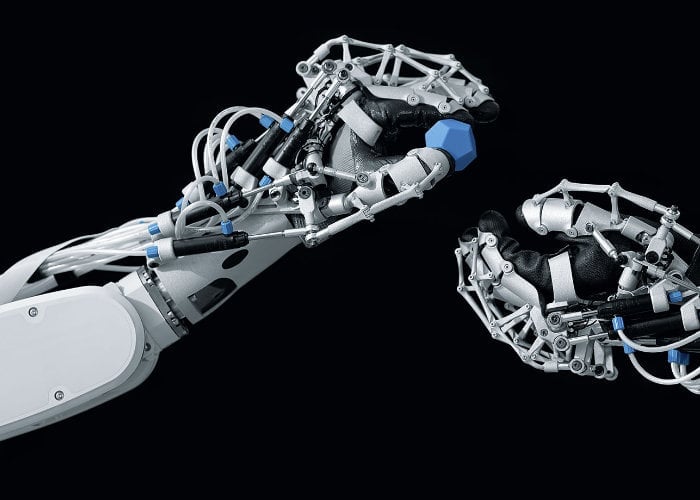 Festo has been demonstrating their next-generation exoskeleton arm that supports the human hand from the outside to improve its strength and stamina. Watch the video below to see the system in action and how it can be used for assembly work or remote manipulation.

The pneumatic exoskeleton is pulled on like a glove, and supports the human hand from outside, the engineering team at Festo explain more about its design, features and functionality.

“With the aid of the ExoHand, the individual fingers can be moved and their strength is thereby reinforced. Conversely, the exoskeleton can also mimic the movements of the hand and transfer them in real-time to the robot’s hands. By means of force feedback, the person feels what the robot is gripping. This means that the human sense of touch can also be made use of across large distances and can even be applied at the interface between the real and virtual worlds.

The shape of the ExoHand is adapted to the user’s own hand and made of polyamide using selective laser sintering (SLS). It is moved by eight pneumatic actuators. The forces, angles and distances are captured by sensors. A CoDESys-compliant control system records and processes the position and force values and enables the second hand to be precisely aligned.

With the ExoHand, Festo is continuing the efforts made in the research field of interactions between man and machine. The aim is to improve the strength and stamina of the human hand, to expand the human scope of action and to ensure independence even in an old age.”