Quite a sight , to be honest. Below is every single robot that has figured in movies for the past century. Movies and cartoons and TV shows to be specific. The challenge, however, is to spot Wall-E. That’s why it’s called Where’s Wall-E (get it?) We’ve already pinpointed where he is, but we’re not telling (there’s a hint after the jump.) On the other hand, his love interest EVE is in plain sight. 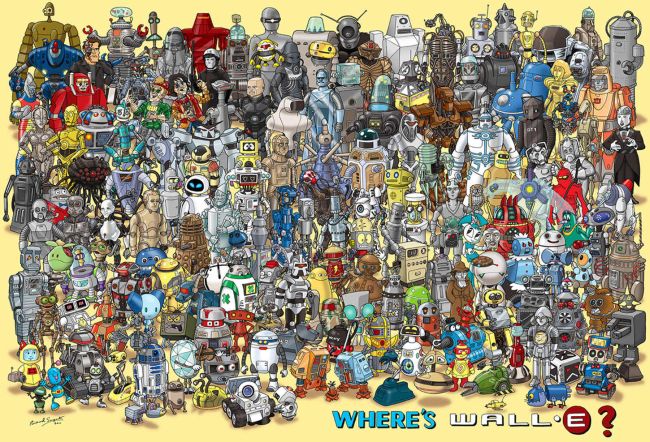 If you’re wondering who bothered creating this brain-torture, it’s none other than animator/artist Richard Sargent. The man is mad about robots from science fiction movies and has finally gone about assembling all of them in one canvass.

A few familiar highlights are an ABC Warrior, a classic old school Autobot, Bender from Futurama, and R2D2 (of course.) The difficult part is spotting Wall-E. It takes a good dose of concentration to do so, but it’s worth a try. However, is the picture above doesn’t suffice, open the source link for a larger version.

If you don’t want to bother, how about naming as many robots as possible in the comments section? No prizes but lots of bragging rights.

(Spoiler Alert!)Hint: Down south beside an old-school Cylon from Battlestar Galactica.

Also, can anyone check if there’s a T-800 in the crowd and point out where?