YouTube user KinectFAAST has unveiled a new Skyrim hack which has been designed to allow players to use Microsoft’s Kinect motion controller within the game. From the look of the video the hack is already showing how great a hack like this would be for games such as Skyrim. Watch the video after the jump to see it in action. 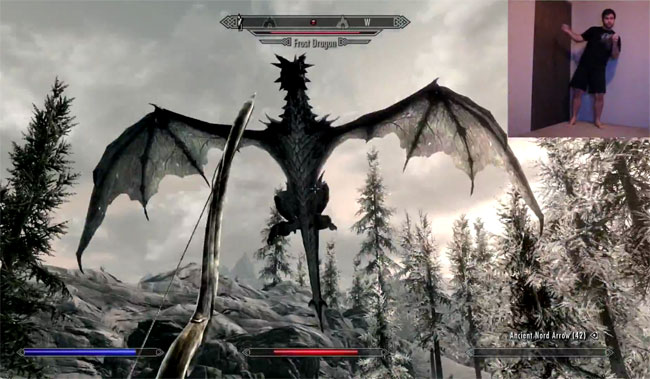 “The gestures are simple and intuitive, yet allow for gameplay depth never before seen with the Kinect. Simply swing your right arm forward, up, left, or right, and your character will hack with his sword. Or, if you have a spell in your right arm, simply raise your hand or push it forward to cast. Use your left arm to control your character’s view; if you have something equipped like a spell or shield, you left arm will control that as well.

Movement is also easy. Put your right foot just inches forward to run, and even further forward to sprint. Your left foot forward switches to a slow walk, while leaning left, right, or back moves your character in that direction.”

Some features that are implemented, but not used in this video include:

– saying “Left hand” or “Right hand” to equip an item to a particular hand when in menu
– saying “Hello” to activate a conversation with a store owner or NPC
– saying “Journal” to access the journal
– saying “Skills” to access the skill trees
– saying “Switch View” to change between 1st and 3rd person perspectives.