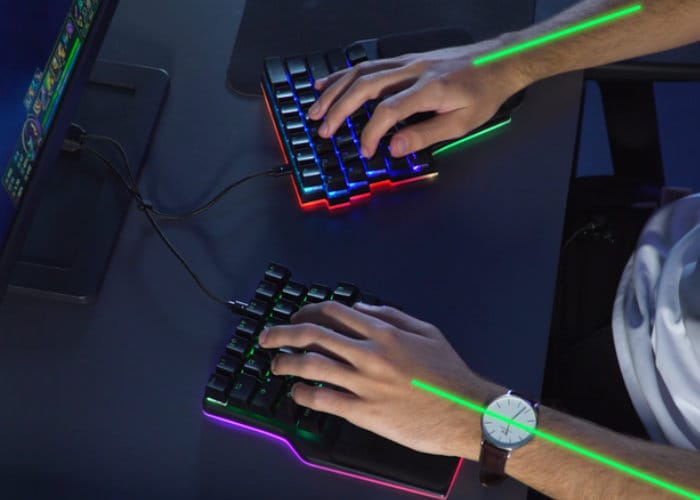 If you find using your gaming keyboard uncomfortable during long gaming sessions you may be interested in a new split gaming keyboard called the Dygma Raise, created by Luis “Deilor” Sevilla based in Valencia, Spain. The two-piece keyboard design allows users to position their arms in more comfortable and ergonomic positions providing less strain on joints and muscles during extended use. Watch the video below to learn more about the Dygma Raise.

Esports is the most extreme activity done with a keyboard. You need to do lightning fast repetitive movements for hours, non-stop, day in and day out. The traditional keyboard layout was designed over 30 years ago and it’s not optimized for gaming and these kinds of movements. Professionals and casual gamers are already suffering the consequences: frequent neck, back and wrist issues.

This raises a question: if young people are already experiencing health issues, what will it be like in 10 years? Gaming is part of our culture, esports is growing non stop and we can’t ignore it.  In gaming, 0.1s can be the difference between victory or defeat. To play at our best we need to be physically and mentally in top shape. That’s why we’ve created Raise, an ergonomic gaming keyboard designed to increase performance, health and comfort.

A normal keyboard forces the wrists to bend towards the pinky side of our hand. Rotating Raise’s halves lets you keep your wrists at a neutral angle, decreasing pressure and strain over time. You can also adjust the width between the two halves, placing them in front of your shoulders to reduce internal shoulder rotation. Its configuration software allows you to create different layouts and toggle instantly between them. Every key in every layout is remappable and can be configured as a macro.

The Dygma Raise split gaming keyboard is now available to back via Kickstarter with early bird pledges starting from €165 and delivery expected to take place during February 2018. For full specifications and more information jump over to the official Kickstarter campaign page via the link below.