Dropbox is one of the best cloud storage services available on the internet. The service has dedicated applications available for all major platforms, Android, iOS, Windows, Mac and Linux, as well as access from any web browser. One excellent feature of Dropbox is the ability to share uploaded files, especially if you’re working in a team.

Recently, Dropbox released an update for its Android application, giving users the ability share files from within the application. Simply create any folder in your Dropbox or pick an existing one, tap on share from the quick options (tap on the arrow key right next to the folder) and invite people you want to share the folder with or send the link of the folder. 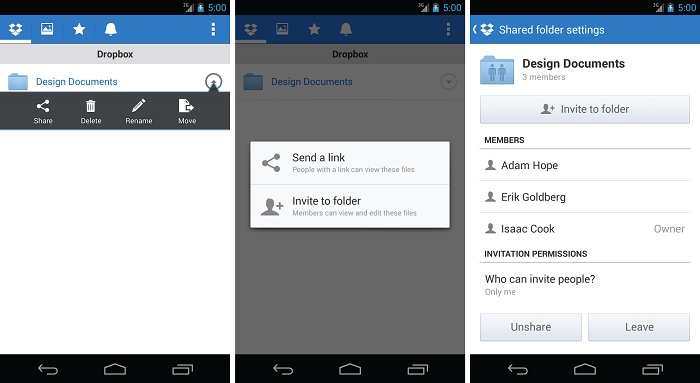 Whether you’re sharing recent vacation photos with friends or collaborating on presentations with colleagues, Dropbox shared folders are great for working with others as though you’re on a single computer. Today, we’re making things even easier by letting you share folders on the go—straight from our Android app!

The update is relatively small, but brings some important features on Android, including the ability to upgrade to Pro from the Google Play Store as well. Here’s the complete change log.

You can download the updated Dropbox for Android from the Google Play Store.