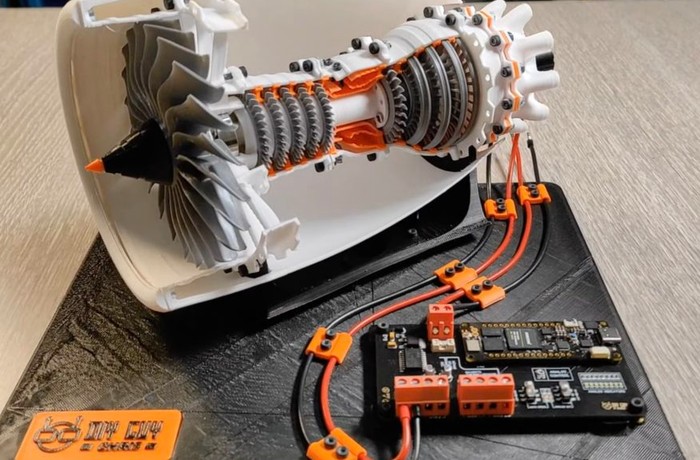 If you would like to learn more about how jet engines work you may be interested in this new DIY Arduino project published by the DIY GUY. The tutorial takes you through how you can create your very own DIY jet engine using 3D printed components and an Arduino Portenta H7 and a custom carrier board.

Build your own jet engine

“Here is the third video of the Throne board tutorials, I remind you that I have designed this throne board to explore the HD Connectors of Arduino Portenta which is a newly released Arduino board for advanced industrial applications. In this tutorial I have produced the 3D Jet engine model provided by Catiav5ftw user from Thingiverse, I remastered some parts and added some extra ones to make the model suitable to spin once I place a DC motor to it, all the details are on the video, happy watching.”

“The 3D-printed model has a breakaway section that lets us see the engine in action. A superb educational tool that covers everything from design and control to operation. And it looks like so much fun to make and play with, too. His latest project puts the custom built Portenta H7 “Throne” board to use. This is a breakout, or carrier board, that he developed to explore ways to use the Portenta H7’s high density connectors.

In this application it’s driving a high powered a DC motor that runs his jet engine model. It’s an elaborate build, with a lot of printed, moving parts. In many respects the application that the H7 is used for is pretty simple, at least on the surface. But what’s great about Chris’ latest project is that it’s an excellent example of how the Arduino board could be implemented in industrial applications.”