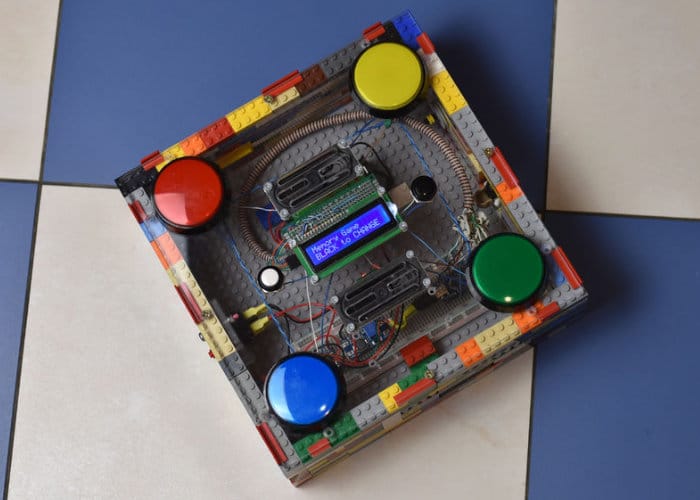 Makers, hobbyists and electronics enthusiasts looking for a project to keep them busy this weekend may be interested in a new DIY Arduino arcade game project which uses LEGO bricks and Arduino hardware together with four buttons to create a memory style games system with five different games to enjoy. Watch the demonstration video below to learn more about the build.

Created by the Lenka Design Workshop the case has been created using a 32×32 LEGO baseplate finished with a clear acrylic cover to house the four large arcade buttons and Arduino board, LED display, speaker and lighting.

The built-in games include :

“If you have kids, you are likely facing the same issues as we did with the Lego sets you bought for them. They assemble and play with them but after a while the sets transform into a single pile of bricks. The kids grow up and you don’t know what to do with this pile. We decided to recycle the unwanted Lego bricks and created an arcade game.

This step by step guide is a result of several months of work to make the game repeatable and very low cost. Pretty much anyone could repeat this project! The code has been written in such a way that it doesn’t have dependencies and will compile on any Arduino board. And of course the games have been intensively tested by our kids :-)”

For more information jump over to the official Instructables website by following the link below.