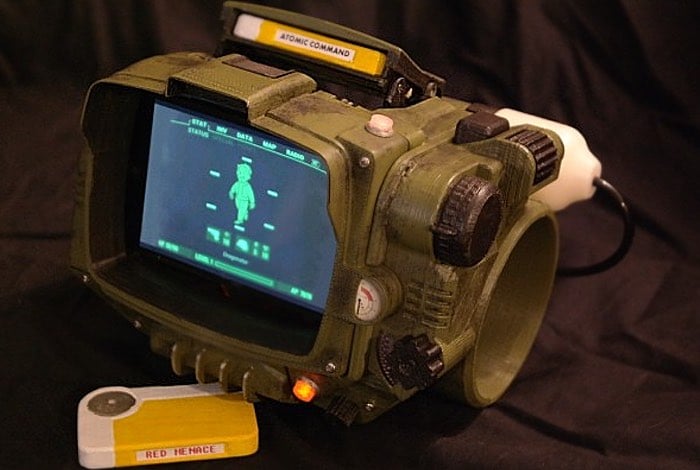 Gamers that missed out on securing their very own Pip-Boy 3000 wrist worn wearable computer that can be powered by your smartphone and is available in the latest Fallout 4 limited edition game bundle.

May be interested in a new 3D printed version of the Pip-Boy 3000 Mark IV from Fallout 4 that has been created and made available to download, so you can create your very own, thanks to Yvo de Haas.

The creator of the 3D printable files explains a little more about the The Pip-Boy 3000 Mark IV that can be powered by a smartphone. Watch the video below to learn more about the wearable and inspiration behind the DIY Pip-Boy 3000, as well as how it was finished after being 3D printed to give it that authentic look.

The Pip-Boy 3000 Mark IV Phone edition is the version that will be most useful for most people. It can hold (as the name suggests) a phone that is within a certain size range. It is simply a case of printing it to have a usable Pip-Boy. To access the phone, 2 knobs near the tape player allow the front to come off. No tools are required to place and remove the phone (though it still take a half a minute or so).

To make room for the phone, some of the buttons have been merged with the body of the Pip-Boy. It does have a latch mechanism and a tape player. The lights on the Pip-Boy can be 3D printed in clear plastic, and can be lit using colored LEDS. The gauges however cannot be lit, there simply isn’t enough room to fit lighting with the phone in the way.

For more information on the Pip-Boy 3000 design and to download the schematics jump over to the Ytec3D website here.